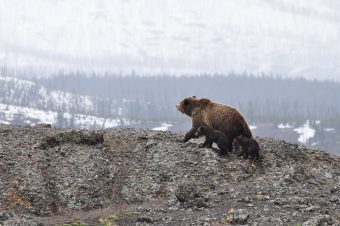 The hunt for grizzlies in Yellowstone National Park is officially over. This week, a judge ordered that all grizzly bears living in or near the park to be put back on the list of endangered species. The ruling stops the attempts of wildlife officials to issue licenses for those want to hunt the bears, which have been protected from hunting for the past four decades.

According to The Guardian, the population of grizzly bears has increased in the last 30 years from around 135 to more than 700 today. While the numbers are improving, grizzlies are only present in four locations in the Rocky Mountains. This has raised concerns about the recovery of grizzlies, as the populations are still isolated from each other. This is one reason why Judge Dana Christensen, who put in a lot of research on the case, decided to put the bears back on the endangered list. As Judge Christensen explained, true recovery means expanding grizzly populations to regions outside of the Rocky Mountains.

While environmental groups and activists praised the ruling, wildlife officials were disappointed by the turn of events. Officials in Wyoming recently put in motion plans for a bear hunt later this year. Up to 22 individuals were granted licenses to hunt grizzlies when the season opened.

Luckily, citizens and conservationists launched a massive campaign — including the Shoot’em with a Camera, Not A Gun initiative — to stop the sport hunting of these beautiful creatures.

The fight to keep grizzly bears on the endangered list is sadly not over. Experts believe that state officials will attempt to repeal the ruling at a higher court. The pro-hunting organization Safari Club International is also expected to make a push toward making grizzly hunts legal once again.

We can only hope that Judge Christensen’s ruling stands the test of time, allowing grizzlies to make a true recovery in the wild.