Together with its Dutch subsidiary, GroenLeven, BayWa r.e. has now built one of Europe’s largest AgriPV projects at the Piet Albers fruit farm in Babberich, as well as four new test projects across the Netherlands.

These four new pilot projects will investigate how solar panels can be combined with a variety of different berry crops.

Stephan Schindele, Product Manager AgriPV at BayWa r.e., said. “Following the success of our pilot project last year, we have now expanded the project to increase its size to 2.7MWp, this latest extension to the project involves the installation of 10,250 solar panels across 3.2 hectares of raspberry crops, generating enough clean energy to power close to 1,250 households.

“Careful monitoring throughout the pilot study showed that the climate under the panels is in fact more stable than under traditional plastic arches. The panels created a more favorable lower temperature and better protected the crops from the weather.”

The successful AgriPV project, had to overcome a number of challenges in its development.

This included the fair distribution of scarce photons from the light spectrum for raspberry growing and solar power generation on the same area. BayWa r.e. designed a unique semi-transparent solar module allowing sufficient sunlight for the plants to pass through while at the same time protecting the crop from hail, heavy rain, and direct sunlight.

Dr. Benedikt Ortmann, Global Director of Solar Projects at BayWa r.e. commented “AgriPV is a form of renewable energy that sits closest to our hearts. BayWa AG has been supporting farmers and rural regions with agricultural services for close to 100 years. AgriPV can bring a social, environmental, and economic benefit to farmers. No land-use conflict, better landscape integration if foil systems are replaced, less waste, less labor and investment cost.”

Piet Albers, the berry producer, confirms: “The solar panels are a more sustainable form of protection for the crops. Whereas previously we used traditional plastic arches, these had to be removed yearly, tore in strong winds and were thrown away every six years. Hail and extreme heat also remained a risk, but with the solar panels we are no longer affected by this and at the same time we also generate green energy.” 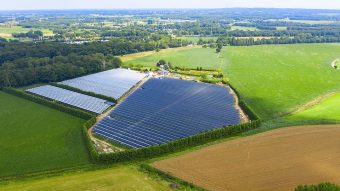 Alongside to the AgriPV project at the Piet Albers fruit farm, GroenLeven has teamed up with Wageningen University (WUR) to investigate four additional test projects which involve other berry crops including red currant, blueberries, blackberries and strawberries.

“Our new study will investigate the effect of the solar panels on these soft fruits and sensors will monitor the climate under the panels. In addition, we will monitor the plants health and fruit growth”, explains Stephan Schindele.

AgriPV is currently not suitable for every country but finding space for solar parks without converting agricultural land is a key challenge for the renewables sector and one that BayWa r.e. is committed to solve. Land-neutral photovoltaic implementation like AgriPV and floating PV show huge market potential for the near future, which BayWa r.e. is eager to untap.

Together with apple and pear producers the company is developing further pilots demonstrating that AgriPV is supporting farmers to adapt to climate change, while at the same time contributing to de-carbonization and global warming mitigation.

The ultimate goal is that through research and monitoring, the BayWa r.e. AgriPV projects will not only promote the use of solar panels with crops, but show that they actually improve the quality of the fruit and reduce the cost of its production. A win-win for the agricultural and renewable sector – together against global warming.