An insecticide is likely to be behind the deaths of almost 200 native birds in northeast Victoria, environment officials believe. 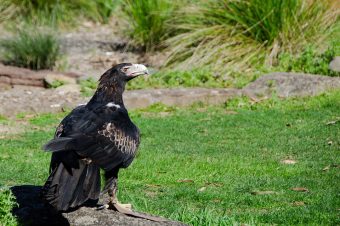 After dead wedge-tailed eagles were found near Violet Town in August the state’s environment department found more – along with hawks and falcons – on a nearby property.

They have since found up to 200 dead native birds in the area, including 25 wedge-tailed eagles.

Tests on six eagles have detected an insecticide used to control mites.

The same agricultural chemical has been found in the carcasses of animals suspected of being used as bait. The department believes it may have caused all the bird deaths. But it is not sure whether the poisoning was accidental.

“It remains unclear if these birds were deliberately poisoned, however given the large number of birds found nearby, it’s a possibility,” the environment department compliance manager, Andrew Dean, said.

Raids have also taken place in recent weeks at properties in Shepparton East and Goomalibee.

“All evidence collected will be forensically analysed, including the carcasses and chemicals seized, which may take some time,” Dean said.

Native birds are protected under the Wildlife Act and deliberately killing them can result in a fine of up to $39,652 or up to two years in prison.