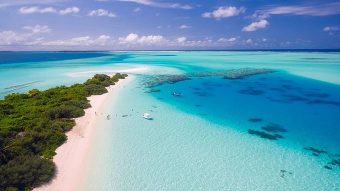 The inaugural meeting of the Island Renewable Energy Initiative (IRIE) was recently held in Malé, Maldives, in partnership with the International Renewable Energy Agency (IRENA) — bringing together senior officials and ministers from 30 different countries and organizations to discuss ways of accelerating renewable energy deployment and addressing climate change.

The Government of the Maldives hosted the event, bringing together small island developing states (SIDS) in its capacity as Chair of the Alliance of Small Island States (AOSIS), according to an email sent to CleanTechnica.

Considering the practical benefits to island nations accompanying a switch from imported fuels to renewables, and the imminent danger that climate change and sea level rise poses to many, the fact that support is as strong as it is — strong enough to spur the creation of the discussed meeting — amongst small island nations shouldn’t be surprising.

For many small island nations, the writing is essentially already on the wall that before too long the island/country will have to be abandoned, so it makes sense for it pursue the most aggressive actions available, or to at least use their position to draw attention to the ongoing changes.

As it stands, more than 2 gigawatts (GW) of renewables capacity has already been deployed in SIDS, with a further 6 GW (or more) of projects now planned.

“In the wake of a deadly hurricane season in the Caribbean and at a time when the resolve to tackle the climate crisis has been called into question, small islands are sending the world a clear message: we are seizing the promise of renewable energy to grow our economies today and build a better future for tomorrow,” commented Thoriq Ibrahim, Energy and Environment Minister for the Maldives and Chair of Alliance of Small Island States. “As Chair of AOSIS, Maldives has made leaving a lasting legacy of renewable energy infrastructure in small islands a priority and IRIE is how we are fulfilling that vision.”

The email provides more: “Despite progress, SIDS face financial and technical barriers as they transition their power, heating, cooling, and transportation sectors to renewable energy, many of which stem from their size, geography and limited capacity. Greater international cooperation can help overcome these barriers by enhanced collaboration and knowledge sharing, leading to improved economies of scale, reduced transaction costs and better enabling environments for donors and investors.

“IRIE works to enhance AOSIS political coordination and outreach to development partners with a view to mobilizing the resources — finance, technology, and capacity building — required for the transformation of energy systems in SIDS. IRIE also works to amplify the success of SIDS focused initiatives, such as IRENA’s SIDS Lighthouses.

“Small islands contribute a miniscule fraction of global emissions and yet we have taken the lead in committing to some of the most ambitious clean energy plans in the world,” continued Minister Ibrahim. “IRIE is a testament to island leadership and the important role the Maldives has played in the international effort to tackle climate change for over three decades.”

To elaborate on that: from the perspective of greenhouse gas contributions to date, small island developing states are often responsible for less than some small towns in long-ago “developed” countries. That, of course, doesn’t matter much in any practical sense as, responsible for the cause or not, such island nations are likely going to be the first regions to have to be abandoned as a result of anthropogenic climate change. With that in mind, the creation of IRIE seems prudent.