Harri Nieminen decided it was time to replace his car with an app.

He had owned a car in Helsinki for the past nine years but recently found he’d lost the patience for parking on crowded city-center streets, especially in snowy months. His almost-new Opel Astra had been sitting mostly idle, so he decided to get rid of it. This lifestyle shift came about with the help of an app offering unlimited rides on public transit, access to city bikes, cheap short-distance taxis and rental cars—all for one monthly fee.

“I downloaded Whim in the fall, and it was around New Year’s when I decided I would sell my car,” said Nieminen, 34, who also uses car-sharing app DriveNow, operated by Bayerische Motoren Werke AG and Finnish financial conglomerate OP Group. “It’s made moving about easier. I can switch modes of transport as needed, and I no longer need to worry about where I’ve left the car or the bike, or about driving it home.” 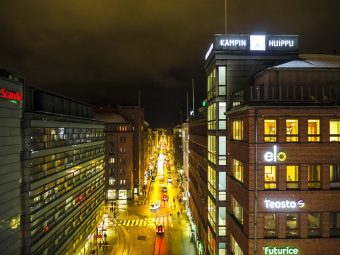 The concept that reshaped Nieminen’s transportation life has an unwieldy name in the industry: mobility as a service, or MaaS. It may become the biggest revolution in personal travel since Ford Motor Co.’s Model T popularized private ownership of motor vehicles a century ago.

The elements of mobility-as-a-service products are already familiar digital services—trip planning, ride hailing, car sharing—alongside the seamless booking, ticketing and payment common to every kind of mobile app. Instead of using one app for rides and local government apps for public transport, Whim offers a single app with a single fee. Users get to pick the most efficient way to get between any two places.

The aim is to eventually make personal cars obsolete by offering people a superior experience. “Your mobile operator can get you all your calls and all the mobile data you need,” said Sampo Hietanen, chief executive officer of MaaS Global Oy, the company behind Whim. “We’re trying to solve the big question in transportation: What do we need to offer to compete with car ownership?”

The cost of cars accounts for as much as 85 percent of personal transportation spending, according to Hietanen, even though the average car is used only 4 percent of the time. That implies a great potential for more efficient allocation: fewer cars shared by a larger group of part-time users. If apps such as Whim can add enough users, optimized trips and increased ride sharing could cut down on single-occupant vehicles and help reduce carbon emissions.

Mobility-as-a-service businesses are booming globally, as ride-hailing giants such as Silicon Valley-born Uber Technologies Inc. and China-based DiDi Chuxing Inc. expand offerings to include bike sharing and public-transit payments. Carmakers are keen to partake in the trend, with the world’s biggest manufacturers investing in and testing various subscription services. Private investments in the field have surpassed $70 billion since the start of 2014, according to data compiled by Bloomberg New Energy Finance.

Even so, all-inclusive transportation apps aren’t yet widely available, and what is now becoming reality in Finland’s capital remains a distant future in many trend-setting cities. But why is this happening in Helsinki, of all places?

The Finnish city, home to the world’s first three-dimensional zoning plan that extends underground, has a habit of thinking outside the box. It’s where the idea of mobility-as-a-service was born, a place where life without a privately owned car is conceivable with help from a well-functioning public transport network spanning the wider metropolitan area. With the city center on a peninsula hemmed in by the Baltic Sea on three sides, Helsinki has limited space for parking or traffic jams.

It’s a small market, said Hietanen, but that makes it a good test site. The ecosystem and legislation were ready very early on, with mobility-as-a-service part of the Finnish transport ministry’s strategy since 2011. Combine that with public transport operators sharing data via APIs and developing mobile tickets, and you have the prerequisites for developing futuristic transportation services.

After its first big marketing push about six months ago, Whim has grown to more than 45,000 users in the Helsinki region, of whom 5,100 pay monthly fees. There are two subscription packages: an all-inclusive 499 euros ($582.65), and a more modest 49 euros that gets you unlimited bus travel and short city bike rides, as well as cheaper taxis and rental cars. A pay-per-ride option also exists for those who want to try out the service.

To become financially viable, Whim needs from 3 to 5 percent of the area’s population to subscribe to a monthly package, according to Hietanen. That critical mass—almost 60,000 users in the Helsinki area—would allow the startup to buy transport services in bulk from the providers and turn a profit as it packages the options for its individual clients.

Sari Siikasalmi, a 37-year-old management consultant, is becoming a convert. She’s tried out Whim and is now weighing giving up the car. Her family, with two kids under the age of 10, uses public transport inside Helsinki but needs a larger sedan for ski trips.

To actually go through with the switch, Siikasalmi “would have to be sure that the type of cars we need are always and easily available nearby when we need them.” That’s not always the case yet.

Service providers are still growing their offerings and mapping out what investments will pay off in the future. And so, mobility-as-a-service will grow only as fast as transport operators are willing to grow.  After two funding rounds, Whim’s raised about 16.5 million euros ($19.3 million) from a number of transport companies, including Toyota Financial Services and Transdev SA.

That money will help bring Whim beyond its Helsinki roots. The company is also active in the Birmingham area in the U.K. and in Antwerp, Belgium. Cities in the pipeline include Amsterdam, Vienna, Berlin and Munich. In North America, potential locations include Miami, Seattle and Vancouver.

“The U.S. is where the pull is the strongest at the moment,” Hietanen says. “Look at New York City. If you need 20 different apps to get around … then my guess is that people are going to be quite ready for this.”