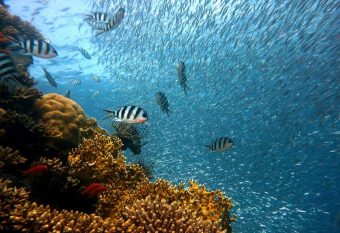 Anthropogenic climate warming could lead to water temperatures in some parts of the world exceeding the thermal survival limits of the fish species living there now, according to new research from the University of Washington.

As it stands, according to the work, water temperatures in the tropical parts of the oceans are already nearing the upper temperature range of what many of the fish living there now can survive.

Given how rapidly temperatures are now warming, and the limits to adaptability in many fish species, it seems likely then that the tropical oceans will lose a great deal of biodiversity over the coming century. And that statement is made without even factoring in the ongoing problem of overfishing.

This wouldn’t be too surprising, as during some earlier periods of extreme climatic warming it appears that the tropical oceans became largely devoid of most large marine animals.

Notably, the new work also predicts that freshwater fish living in the higher latitudes of the Northern Hemisphere will be facing an existential crisis as well.

“The researchers compiled data from lab experiments involving nearly 500 fish species, conducted over the past 80 years by researchers around the world. These standardized experiments measure the highest temperatures fish are able to tolerate before they die. This analysis is the first time these disparate data from lab experiments have been combined and translated to predict how fish will respond in the wild…The researchers found that overall, sensitivity to temperature changes varied greatly between ocean-dwelling and freshwater fish.”

It should be noted here, before going deeper into the new research, that such work doesn’t really take into account the fact that as environmental conditions change so does genome expression. In other words, epigenetic changes accompanying rising water temperatures will no doubt result in some adaptive changes to physiology (smaller body size, etc) — though there will be sharp limits to what’s possible as far as that goes among many species.

A simpler means of adaption, of course, is simply to change the range that one lives in. This process already seems to be occurring in many parts of the world’s oceans, with some species now expanding rapidly into waters that they have not been found in historically.

“Nowhere on Earth are fish spared from having to cope with climate change,” explained senior author Julian Olden, a UW professor of aquatic and fishery sciences. “Fish have unique challenges — they either have to make rapid movements to track their temperature requirements, or they will be forced to adapt quickly.”

“Using years of data — and relying on the fact that many fish species are taxonomically related and tend to share the same thermal limits — the researchers were able to predict the breaking-point temperature for close to 3,000 species. Regional patterns then emerged when those data were paired with climate-model data predicting temperature increases under climate change.

“By contrast, in freshwater streams in the far north, fish are accustomed to cooler water temperatures but have much less tolerance for warming waters. Since the effects of climate change are acutely felt in high latitudes, this doesn’t bode well for fish in those streams that have a small window for survivable temperatures.

“Fish will either migrate, adapt or die off as temperatures continue to warm, the researchers explained. Given past evolutionary rates of critical thermal limits, it’s unlikely that fish will be able to keep up with the rate at which temperatures are increasing, Olden said. The ability to move, then, is imperative for fish that live in the most critical areas identified in this analysis.”

Something that will stand in the way of this occurring, in many ways, is the ubiquitous presence of dams in many parts of the northern hemisphere. While fish ladders, or the like, could perhaps help somewhat, the approach doesn’t work well with all species. The researchers note that the restoration of vegetation along lake or river edges could perhaps help somewhat (to a limit) — by providing shade and helping to reduce water temperatures.

With regard to the impact on humans, the takeaway of this new research is essentially that people who live in the tropics and depend upon fish for their sustenance will have to look elsewhere more and more and the century grinds on.

In other words, even without considering overfishing, the tropical oceans are going to become much less capable of supporting the large human populations that it does now. This circumstance will be compounded by production and yield problems in other parts of the global food system.