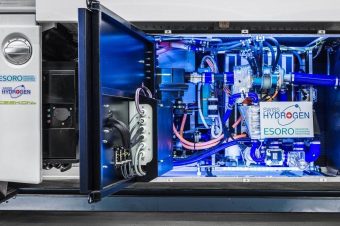 Installed in its new premises, Swiss Hydrogen SA recently inaugurated the first hydrogen station in Freiburg and unveiled the “Hy-Rex 10”, a 100% zero-free of CO2 emission range extender for electric vehicles.

Swiss Hydrogen SA, together with BlueFACTORY Freiburg-Freiburg, gathered nearly 100 regional, political, media and partners to discuss the inauguration of the first hydrogen filling station in Freiburg. Swiss Hydrogen also introduced its first series vehicle equipped with the “Hy-Rex 10” kit, which more than doubles its driving range thanks to its hydrogen tank.

The event generated a great deal of enthusiasm and was particularly welcomed by Mr. Thierry Steiert, City Manager of Friborg.

– We are proud that Swiss Hydrogen has chosen Friborg and especially BlueFACTORY for its launch. This approach fits perfectly into our energy policy and our eco-compatible mobility strategy and, of course, into the “low carbon” orientation of BlueFACTORY – says Thierry Steiert.

– It is an opportunity for us to be based in the heart of Friborg – says Alexandre Closset, CEO of Swiss Hydrogen – We are excited to expand our activities and we hope that this first will generate more and more Demand for hydrogen solutions, especially for fleets of delivery vehicles, trucks and buses!

A technological nugget on the BlueFACTORY innovation site

– Hydrogen is one of the key solutions to the energy transition! – says Philipe Virdis, Vice President of Swiss Hydrogen AG.

– As a high-potential energy carrier, hydrogen has many advantages, including not to emit CO2 and can be produced in a decentralized way from any renewable energy source. Hydrogen can then be used as a clean fuel for mobile and stationary applications. As a result, it can play an important role in the energy transition by allowing surplus renewable energy to be stored during the summer period, such as hydropower or solar, in order to help fill the deficit by restoring this Energy during the winter season.

Director of BlueFACTORY, Philippe Jemmely welcomed the arrival of the start-up.

– Being able to count on a company that represents both the values of innovation and sustainability is an honor for BlueFACTORY, to have been able to develop this project together is an example of successful collaboration and dialogue. They are not only ambassadors of entrepreneurship, but real adventurers.