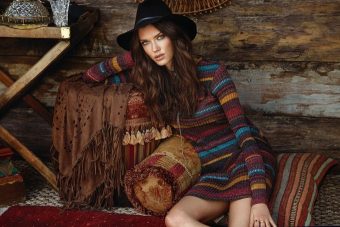 Since the “Detox My Fashion” campaign launched in 2011, 76 fashion brands, retailers and suppliers have committed to remove toxic chemicals from their supply chains by 2020, accounting for a combined 15 percent of global textile production. For its 2016 Detox Catwalk, Greenpeace evaluated 19 of the committed fashion and sportswear companies to see which are on track to follow through.

Greenpeace assessed how companies have performed against key criteria related to their Detox 2020 plans, substance elimination, and transparency. The report dissects whether companies have proactive, precautionary systems in place for eliminating hazardous chemicals; their progress on substituting per- and poly-fluorinated chemicals (PFCs) and other known hazardous substances from their products and manufacturing processes; and their disclosure of suppliers’ lists and the pollution they discharge.

While most had mixed results, H&M, Inditex (parent company of Zara, Pull & Bear, Massimo Dutti and Bershka) and Benetton stood out as front runners, while Nike, Esprit, Li-Ning and Limited Brands (parent company of Victoria’s Secret and LaSenza) received the lowest scores.

“Our assessment shows that the textile industry as a whole is not doing enough to go toxin-free. 16 out of the 19 brands assessed are stumbling over transparency issues or failing to eliminate toxic chemicals; with  only three years left they must speed up now if they’re to meet their 2020 deadlines,” said Kirsten Brodde, Head of the Detox My Fashion campaign at Greenpeace Germany.

H&M and Inditex are two of the world’s largest fashion companies, while Benetton is a mid-sized Italian brand. They were the only three to rank in the ‘Avant-Garde’ category for being “ahead of the curve,” with “credible timelines, concrete actions and on-the-ground implementation.” All three have completely eliminated PFCs, take a “clean factory” approach, and monitor water discharge.

“We applaud H&M, Zara and Benetton for leading the way and setting a new standard in toxic-free fashion,” Brodde said. “These companies prove that cleaning up the fashion industry is possible – both for large and medium-sized companies.”

Many of the remaining companies were heavily criticized by their reliance on the “flawed chemical list from the industry group Zero Discharge of Hazardous Chemicals (ZDHC),” which Greenpeace asserts is missing important substances such as PFCs and solvents such as Dimethylformamide (DMF). Furthermore, the organization repeatedly insists that elimination of PFCs must be accompanied by hazard-based assessment of alternatives, which even some of the top scorers have not yet implemented.

Nike was one of the companies to receive particularly harsh judgement on those grounds. As Greenpeace put it, Nike was “the only brand to completely fail on all three of the categories assessed.” Interestingly, the organization effectively awarded Nike a score of 0 out of 9 (there were 3 levels for each of the 3 key areas assessed), despite noting that the sportswear company has successfully eliminated all C8 PFCs and has phased out 90 percent of all PFCs from its products, in addition to publishing an online interactive map of its suppliers. Greenpeace explained that Nike has not committed to eliminate all PFCs from all of its products by 2020, among other gaps in its Detox 2020 plan, including that it relies on the ZDHC list. The NGO added that “Nike needs to transform its attitude.”

Nike was joined in the ‘Faux Pas’ category by Esprit, Li-Ning and Limited Brands, which Greenpeace asserts “are currently heading in the wrong direction, failing to take individual responsibility for their supply chains’ hazardous chemical pollution.”

The vast majority – 12 of the 19 evaluated companies – are still in ‘Evolution Mode,’ and need to improve their performance in at least two of the three key assessment criteria. These include Adidas, Burberry, Levi Strauss & Co., Marks & Spencer, Primark and Puma, all of which Greenpeace says are not banning enough hazardous chemicals due to their reliance on the ZDHC’s “flawed methodology.” Greenpeace previously campaigned against Adidas, Nike and Puma for producing gear that contained hazardous chemicals for the 2014 FIFA World Cup in Brazil.

Companies such as C&A, Fast Retailing, G-Star, Mango, and Miroglio scored higher within the same “Evolution Mode” group, either for better chemicals management or greater supply chain transparency. Specifically, C&A was applauded for the latter, while G-Star and Mango have both completely eliminated PFCs from their products.