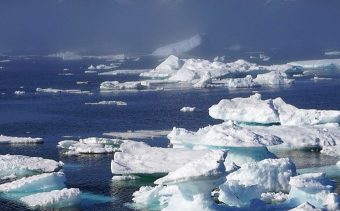 The Greenland ice sheet is likely to be heavily contaminated with various globally emitted pollutants — such as PCBs, mercury, lead, PAHs, etc. — according to new research published in the journal Environmental Research Letters.

So, despite its image as a relatively pristine environment, Greenland is already heavily contaminated by industrial activity, which means that, as the ice sheet there thaws, surrounding waters are going to experience an influx of dangerous pollutants.

This isn’t too surprising, as much recent research has shown that the Arctic, owing to various patterns of atmospheric circulation, is now home to very high levels of industrially emitted mercury pollution. Other seemingly remote parts of the world, such as the Himalaya mountains, are also known to now be home (in the ice, snow pack, etc.) to very high levels of industrial pollutants.

The new findings are the result of work done examining the ability of local microbial populations to resist and degrade pollutants — a common and reliable means of gauging contamination levels.

Lead researcher, Dr Aviaja Hauptmann of the University of Greenland, commented: “Globally emitted contaminants accumulate in the Arctic and are stored in the frozen environments of the cryosphere, essentially meaning they have become reservoirs of toxic chemicals.”

The press release provides more: “The researchers took samples from multiple surface ice locations on the Greenland ice sheet, which they analysed using metagenomic data and binned genomes. Their results show that the microbial communities found in the ice sheets have the potential to resist and degrade contaminants.”

“… They also found that binned, or grouped, genomes showed close resemblance to microorganisms isolated from contaminated habitats. Since the genetic potential of contaminant resistance and degradation usually indicates the presence of the relevant contaminants, their results indicate that, from a microbiological perspective, the Greenland ice sheet is not a pristine environment.”

Dr Hauptmann noted: “The microbial potential to degrade anthropogenic contaminants, including polychlorinated biphenyls (PCB), polycyclic aromatic hydrocarbons (PAHs), and the heavy metals mercury and lead, was found to be widespread, and not limited to regions close to human activities.”

It then concluded: “More attention needs to be paid to the potential release of anthropogenic contaminants in this fast-changing environment. As the ice sheets melt due to climate change, they have the potential not only to increase sea level, but also pollute the environment around them through the release of other anthropogenic pollutants that have accumulated in them.”

This is something to keep in mind as the melting of Greenland’s ice sheet picks up in earnest over the next few decades.

While it isn’t often discussed, I’ll use this as an opportunity to note that there a number of mechanisms by which Greenland could contribute several feet to sea level rise in a very short period of time (maybe a 2–3 year time window sometime over the next 20–40 years). This is due to the bowl-like geography of the landmass that currently holds the ice sheet in place, amongst other things. The potential for rapid, catastrophic coastal sea level rise and flooding is definitely there — even if it isn’t publicly discussed much.