It is not just the hackberries and yew trees that are the green symbol of Sombor given that the environmental standards and clean technology are also being more and more applied in the industry and communal life in this town. How far ahead the Sombor citizens are regarding the strategy of sustainable development and how it affects their life, as well as the Sombor’s tourism and economic potential, we are discussing with the Mayor of Sombor Dusanka Golubovic

Everyone who visits Sombor remembers this city by its greenery. Still, those who spend a little more time in the company of Somborians will realise that when it comes to lifestyle and environmental protection, the residents of this municipality think green. So does their city administration, led by the Mayor Dusanka Golubovic, from whom we learn firsthand what the priorities of this municipality are in terms of ecology, how to maintain the public order, as well as keep the water, land and air clean. Also, we learn the significance of the project of producing electricity from the wastewater, which is nearly being finalised, and what the expectations of the regional waste management centre are which is about to be built in Sombor.

EP: With the length of 120 kilometres of tree-lined alleys and more than 18,000 trees, they say, that Sombor is the greenest city in the country and Europe. Is that officially true?

Dusanka Golubovic: The data you provide is accurate, but unfortunately, there are no official records of the greenest city in Serbia. What we claim with certainty is that everyone who visits Sombor remembers our town by its greenery. The most common species of trees in the tree alleys is the honeysuckle, known among Somborians as bođoš, which was brought to our city as early as 1903. It was planted as a medium for combating dust, as its rugged leaf collects dust from the air, but also as a means for combating excess water since this terrain was once a wetland. For the same reason, the centuries-old yew survived here, besides the ones in Kalemegdan which are the only other ones still in existence in Serbia. Besides the hackberry and yew, there are significant numbers of maple, elm, birch, wild chestnut and other woody species in Sombor’s alleys and parks. Many trees are over a hundred years old and have reached their maximum lifespan, so they need to be rejuvenated. Over the last year alone, we have removed 493 trees and planted 952.

EP: Is that much greenery also followed by green standards in the environment, public order and the economy? Do you belong to a few local governments that have a strategy for improving the quality of the environment, and what are your priorities?

Dusanka Golubovic: The City of Sombor has a Sustainable Development Strategy for the period 2014-2020, and the creation of a new one is underway this year. It shows that the priority is a better quality of the environment, and it will be implemented through specific goals such as the reduction of harmful links between the environmental pressures and the health of the local population; the improvement of the ambient air quality; the effective management of the risks of endangering the human health and environmental pollution. Also, we have been performing the monitoring of the surface and groundwaters for many years now, since 2018, the monitoring of air quality, as well as the noise pollution monitoring, and earlier this year we adopted the regulations concerning the control of the soil. In accordance with the Air Protection Law, we have drawn up a short-term action plan for the air protection in Sombor’s territory for the period of 2020-2023, which has been forwarded to the Ministry of Environmental Protection for their approval. What we consider to be one of our principal activities is a regular education of school children to raise their awareness of the need for environmental protection

EP: Who are currently the biggest polluters in Sombor and how much are the green standards implemented in the business of the companies and manufacturers in your municipality?

Dusanka Golubovic: We are currently in the process of data collection for the year 2019, which will be published on the city’s official website probably after March 31st, which is a deadline for the polluters to submit their reports to the competent department of the City’s Administration. However, it can be said that in the City of Sombor, the biggest problem is the Veterinary Institution “Proteinka” with the emission of unpleasant odours that are sometimes felt throughout the city. The final solution of the “Proteinka” problem is what we all expect from the Ministry of Agriculture in the near future. On the other hand, we also have an example of good practice so we can mention the plant of the company “Agroplus”, which is the first bio-gas power plant built in West Backa district, which obtains biogas from manure and green waste. This company has built a facility based on German technology adjacent to their farm in Svetozar Miletic, where they obtained a singular production unit from which 1.2 MW of electricity is supplied to the Serbian power network. Besides, we have an announcement of an investor who already operates in our territory and who shares our opinion about the necessity of the introduction of solar sources for obtaining energy, that they are preparing for an investment in solar panels in a capacity that will exceed their needs. The surplus of the generated electricity will be available to the Serbian power network.

Photo: Cabinet of Mayor of Sombor

EP: Not only are you the first and one of the few municipalities in Serbia that acquired a wastewater treatment plant, but you also announced last year that the electricity generation from the wastewater would be starting soon. Is this process completed?

Dusanka Golubovic: The Sombor’s PUC “Vodokanal” has a long tradition in the process of collection, drainage and treatment of wastewater. The first wastewater treatment plant was put into operation in 1964, while the wastewater treatment plant built in 1986 is still in operation today and has a much higher capacity. The purifier is developed based on a waterline (with a primary and secondary purification) and a sludge line, which is also composed of anaerobic conversion of biogas. The biogas from the plant has been used to heat the technological process and the buildings within the plant. To utilise the biogas completely, the plan is to use it to power the gas generator that is part of the IPA Serbia-Croatia Cross-Border Cooperation Project. From an economic point of view, we expect significant savings here.

In addition to the gas generator, the technical documentation for the project of the future solar power plant at the wastewater facility has also been prepared. By using renewable energy sources, “Vodokanal” will strive to achieve full energy independence at the wastewater facility in the future. The installation of the gas generator is the first stage in the process of obtaining electricity from biogas, and this phase has been completed. The second phase contemplates the use of new raw material in addition to the sewage sludge already in use, which is maize silage. The gas generator with the inlet basket has been entirely built with a new transformer station, and we foresee the construction of the switchgear which has been contracted. It represents the link between the wastewater treatment plant and the electricity buyer – EPS. The switchgear is planned to be completed by early summer.

Read the whole Interview in the new issue of the Energy portal Magazine NATURAL RESOURCES, march – may, 2020 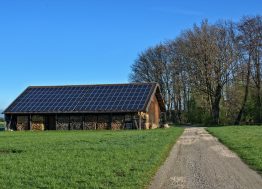