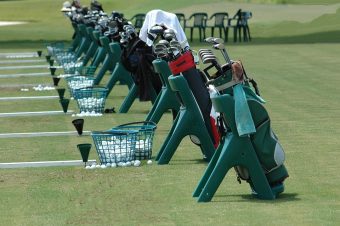 The plastic waste in our oceans is a major environmental problem thanks to humans tossing out single-use items like take-out containers, plastic straws, water bottles and plastic bags. But there is also an unexpected source of plastic waste that a teenage diver recently discovered — golf balls.

When 16-year-old Alex Weber was swimming in a small cove near Carmel, California two years ago, she looked down and discovered there were so many white golf balls in the water that she couldn’t see the sand.

Weber immediately decided to pick up as many as she could. Over the next few months, she and her father hauled hundreds of pounds of golf balls out of the water and stored them in the garage. But with five coastal golf courses nearby, golfers continued to hit the balls into the ocean.

Eventually, Weber discovered Matt Savoca, a Stanford University scientist who studies plastic waste in the oceans. The teen emailed Savoca and invited him to look at her stash, which featured thousands of golf balls.

Weber’s haul impressed Savoca, and he told her that she should write a scientific paper, but Weber didn’t know how to do that. So the two ended up working together, and he started diving with her. They also brought kayaks so they could take the golf balls back to land.

After grabbing the golf balls, Savoca said they would put them on the kayak, and Weber explained that the kayaks were “so filled with plastic” that they had to tow them by swimming them to shore. The biggest threat to the pair while they were recovering the golf balls wasn’t the sharks in the water. Instead, it was golf balls flying from the nearby courses right into the spot where they were collecting.

Golf balls are coated with a thin polyurethane shell, and overtime as the shells degrade, they emit toxic chemicals. The balls also degrade into microplastic pieces that marine animals eat.

Since the first discovery, Weber continues to collect golf balls and manages The Plastic Pick-Up to encourage eliminating ocean pollution. Weber said, “If a person could see what we see underwater, it would not be acceptable.”