A working paper recently published by the Federal Reserve Bank of Richmond concludes that global warming could significantly slow economic growth in the US. 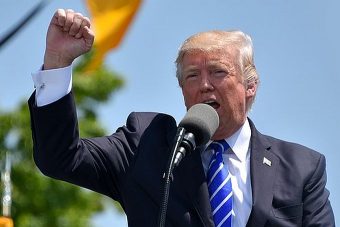 This paper is consistent with a 2015 Nature study that found an optimal temperature range for economic activity. Economies thrive in regions with an average temperature of around 14°C (57°F). Developed countries like the US, Japan, and much of Europe happen to be near that ideal temperature, but continued global warming will shift their climates away from the sweet spot and slow economic growth. The question is, by how much?

House Majority Whip Steve Scalise, who represents Louisiana (the second-hottest state), recently introduced a new anti-carbon tax House Resolution. Scalise introduced similar Resolutions in 2013 with 155 co-sponsors (154 Republicans and 1 Democrat) and in 2015 with 82 co-sponsors (all Republicans). The latest version currently only has one co-sponsor, but more will undoubtedly sign on. All three versions of the Resolution include text claiming, “a carbon tax will lead to less economic growth.”

As the economics research shows, failing to curb global warming will certainly lead to less economic growth. Climate policies could hamper economic growth, but legislation can be crafted to address that concern.

For example, as Citizens’ Climate Lobby notes in its point-by-point response to the Scalise Resolution, an economic analysis of the group’s proposed revenue-neutral carbon tax policy found that it would modestly spur economic growth (increasing national GDP by $80 to 90bn per year). With this particular policy, 100% of the carbon tax revenue is returned equally to households, and for a majority of Americans, this more than offsets their increased costs. As a result, real disposable income rises, and Americans spend that money, spurring economic growth.

While the Federal Reserve paper focused on the US economy, developing countries will be made much worse off by climate change. Many third world countries are located closer to the equator, where temperatures are already hotter than the temperature sweet spot identified in the 2015 Nature study. A new paper published last week in Science Advances also found that these poorer tropical countries will experience bigger temperature swings in a hotter world. Because of this combination of hot temperatures with bigger swings in countries with fewer resources available to adapt, these poorer nations are the most vulnerable to climate change impacts.

This is a key moral and ethical dilemma posed by global warming: as an important 2011 study concluded, the countries that have contributed the least to the problem are the most vulnerable to its consequences. Meanwhile, wealthy countries are already lagging behind their promised financial aid to help poor countries deal with climate change.

When evaluating climate policies, it’s important to compare the outcomes to the correct baseline. In a world without a carbon tax or other efforts to tackle climate change, temperatures will continue to rise, which will slow economic growth. That’s the baseline against which climate policies need to be compared.

Thus, even if a carbon tax were to slow economic growth, the question is whether it would slow more or less than in the hotter world without the carbon tax. That largely depends on what the rest of the world does, since the US is just one country representing about 14% of global greenhouse gas emissions. But the rest of the world has agreed to try and limit global warming to 2°C in the Paris climate accords – the US is the only country whose leaders are stupid enough to reject that agreement.

Rejecting climate policies like a carbon tax will ensure that the world misses the Paris targets, resulting in slower economic growth. This will particularly hurt poorer countries and Trump’s base in the South. The Federal Reserve Bank paper notes that these states are already among the least developed in the US, based on the Human Development Index. This means that they already have the weakest economies in the US, and failing to take steps to slow global warming will just hamper their economic growth further yet.

In short, if Trump, Scalise, and the rest of the Republican Party want to prevent slowed economic growth in red states, they should be trying to craft an optimal carbon tax, not blindly rejecting the idea outright.