A fast-flying migratory butterfly from the Mediterranean is appearing in large numbers across southern England this summer as a result of global heating, experts say. 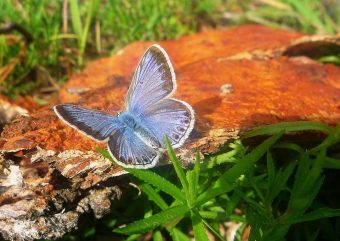 More than 50 long-tailed blues and hundreds of the butterfly’s eggs have been discovered in recent weeks, which is likely to result in an unprecedented emergence of the butterfly in Britain later this autumn.

“We’ve never recorded this many migrant adults before – it’s completely unprecedented,” said Neil Hulme of Butterfly Conservation, an expert on the long-tailed blue. “In only a few days, I’ve found more than 100 eggs in Sussex alone and the butterfly has been seen in Cornwall, Somerset, Devon, Dorset, Hampshire, Kent and Suffolk. We’ve even had a sighting in Glamorgan, in south Wales.”

The long-tailed blue is abundant in Africa and southern Europe but was once an extremely rare visitor to Britain – possibly brought in accidentally on imported plants and vegetables. Only 30 butterflies were recorded over 80 years after it was first spotted in Britain in 1859.

But this is the third time in six years that large numbers have crossed the Channel to reach the south coast, with a record 109 sightings in 2013.

The long-tailed blue may be small but it is a powerful flyer and lays eggs on plants such as everlasting pea, which are common in gardens and allotments. The eggs laid by migratory butterflies will hatch adult butterflies at the end of September or in October, but British winters are too cold for the butterfly to survive.

Hulme added: “In hot weather it can go through its entire lifecycle in just over a month, which is half the period taken by many species. The caterpillar grows up inside the flowers and pods of peas and similar plants, hidden away from predators. It has the full toolkit for world domination.”

This is proving to be a vintage year for migratory insects, with the largest invasion of painted lady butterflies since 2009 and other rarer migrant species such as the bedstraw hawk-moth and the Queen of Spain fritillary also being recorded.

“Our rapidly changing climate brings positives for some expanding species, while others may find it much harder to adapt and keep pace with the changes,” he said. “Butterflies, moths and other insects respond quickly to environmental change, providing an indicator of the impacts of a warming climate on the natural world.”