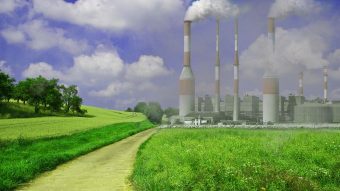 After years of flat growth, global carbon dioxide emissions are set to rise again in 2017 to hit a record high, according to new data that seriously threatens international efforts to avert dangerous global warming.

The Global Carbon Project’s 12th annual report unveiled this morning at the UN climate summit in Bonn suggests an increase in coal use in China and sluggish progress by the US and EU to decarbonise was behind the emissions uptick.

The rise, after years of flat growth, has sparked fears the world could be moving backwards in the fight against climate change just at the period when emissions need to start coming down sharply.

“With global CO2 emissions from human activities estimated at 41 billion tonnes for 2017, time is running out on our ability to keep warming well below two degrees let alone 1.5 degrees,” she warned.

“This year we have seen how climate change can amplify the impacts of hurricanes with more intense rainfall, higher sea levels and warmer ocean conditions favouring more powerful storms,” she added. “This is a window into the future. We need to reach a peak in global emissions in the next few years and drive emissions down rapidly afterwards to address climate change and limit its impacts.”

Although the figures are not final, they are agreed by more than 70 of the world’s leading climate experts from more than 50 institutions. The formal projections put the potential rise at between 0.8 per cent and three per cent.

The data follows hot on the heels of a concerning study released last month reporting that greenhouse gas emissions are at their highest atmospheric concentrations in at least 800,000 years. Meanwhile the World Meteorological Society has also already concluded that 2017 is set to be one of the three hottest years on record – with 2015, 2016 and 2017 all in the top three.

The news adds extra pressure to policymakers and diplomats gathered in Germany for the final week of talks at the annual UN climate summit. Negotiators need to hash out a global ‘rule book’ for the Paris Agreement, which countries signed in 2015 with the aim of limiting temperature rises to “well below” two degrees.

“The only way we are going to see these emission numbers go in the right direction is if the politicians spend less time talking about their Paris pledges and more time actually meeting them,” Christian Aid’s international climate lead Mohamed Adow warned. “They need to change the facts on the ground. Coal needs to be rapidly phased out of the global energy mix, while renewables must be ramped up far quicker.”