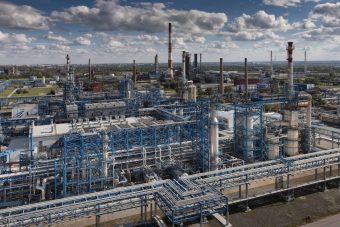 A project for the construction of a process condensate purification facility at the Gazprom Neft Omsk Refinery has been approved by federal agency Glavgosekspertiza Russia. This project is part of a wide-ranging environmental programme at the Omsk Refinery, involving the full-scale modernization of the plant. The new facility is expected to be commissioned in 2018.

The new 100-cubic metre-per hour facility will allow the removal of ammonia and sulphides from process condensate produced by secondary refining units. After purification, 97 percent of the water obtained will be returned directly to the plant’s production run (process cycle), with the sulphides and ammonia recycled into sulphur and nitrogen — both in considerable demand in the petrochemicals industry.

Gazprom Neft has been implementing an extensive modernisation programme at its Omsk Refinery since 2008, directed at improving the quality of the oil products produced at the plant, increasing refining depth and operational efficiency, and increasing the yield of light oil products. Implementation of various projects under the first phase of the modernisation has already seen a reduction in environmental impacts of 36 percent in line with the proportional increase in refining volumes.