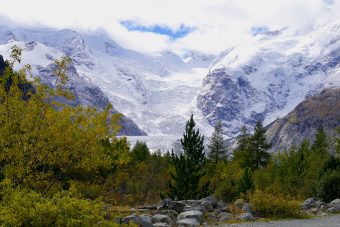 A deadly flood in northern India, sparked by a cratering glacier, was not an isolated incident but the result of a rapidly warming planet, say experts. They warn the disaster, which has left over 140 feared dead, is a precursor of what is to come unless drastic measures are taken to slow climate change.

The flood this week in the Himalayan state of Uttarakhand was caused by a glacier breaking away and falling into the valley, sending a surge of water downstream that engulfed villages and workers at a hydroelectric plant.

Data suggests that, in the coming years, global warming will cause mountain temperatures to rise twice as fast as the global average, whittling away glaciers and threatening communities in the Himalayas, and further afield.

“Glaciers around the world are under siege,” said Matthias Jurek, a mountain ecosystem expert with the United Nations Environment Programme (UNEP). “Unless we can limit global warming, support monitoring, early warning and adaptation measures, disasters like the one in Uttarakhand will, unfortunately, become more common.”

UNEP and its partner organizations work with mountain communities and governments world-wide to increase resilience to the impacts of climate change. One of UNEP’s key partners in Asia is the International Centre for Integrated Mountain Development (ICIMOD), which, among other tasks, monitors ice coverage and glacial lakes in the high mountains in the Hindukush- Himalayas.

In regions like the Himalaya, the problem of rising temperatures is three-fold: it leads to the melting of mountain glaciers, which can spark floods. It also decreases glacial coverage, which leads to a reduction in the long-term availability of water for people, agriculture, and hydropower. Finally, as glacier cover diminishes and the area is replaced by water or land, the albedo – the amount of light that is reflected without being absorbed on a surface – also decreases. This could increase solar energy absorbed, leading to more warming.

Glaciers are often referred to as the “water towers” of the world, with half of humanity depending on mountains for their water needs. The Tibetan Plateau alone is the source of 10 of Asia’s biggest rivers and provides water to 1.35 billion people, or 20 percent of the world’s population.

The World Glacier Monitoring Service, a Switzerland-based organization that works closely with UNEP, monitors global glacial change. In the 1960s, its data showed, glaciers were largely in a steady state but since the 1970s glacial loss has increased rapidly, almost doubling every decade until present. They note that this ice loss “leaves no doubt about ongoing climate change.”

In the Paris Agreement, Member States committed to limit global temperature increases to well below 2°C, and preferably to 1.5°C, compared to pre-industrial levels. Slowing global warming would help save glaciers, but countries must also prepare mountain ecosystems for an inevitable increase in temperatures. The best way is through adaptation, in other words, introducing a change into the ecosystem that will help combat the impact of global warming.

Within the context of the Adaptation at Altitude programme funded by the Swiss Agency for Development and Cooperation, UNEP and partners are working on innovative solutions to adapt to a warming planet.

Our ecosystem-based adaptation projects are restoring forests and shrubs on mountain slopes, which helps prevent both floods and landslides by holding the soil together and regulating the flow of surface water run-off,” said Jessica Troni, Head of the Climate Change Adaptation Unit at UNEP.

While ecosystem-based adaptation projects cannot stop glaciers from melting, they can significantly reduce the disastrous impacts. Further, they can help mountain communities to adapt to a warmer climate, for example by promoting drought-resistant crops.

But it is not just melting glaciers that cause landslides and floods in mountainous regions.

In Nepal, for example, increased monsoon rainfall and a decrease in winter rain, a result of climate change, has led to crop losses due to droughts and floods, placing communities at risk from food insecurity. A UNEP-supported project, known as EbA South, is working to combat the impacts of unseasonal rainfall. The programme has planted over 840,000 seedlings. These trees and their root systems act like sponges, absorbing water during intense rains and storing it for times of drought.

“As global warming increases, crop losses and tragedies like the one in Uttarakhand are likely to become more frequent, making UNEP and its partners’ work on ecosystem-based adaptation all the more important in building the resilience of mountain communities to climate change,” said Jurek.