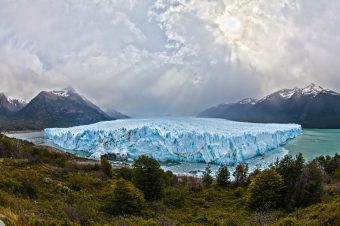 Residents of the community of Innaarsuit in Greenland were told to move to higher ground after a 100 meter (approximately 330 foot) iceberg floated perilously close to their shores, The Guardian reported Saturday.

“We fear the iceberg could calve [break apart] and send a flood towards the village,” Lina Davidsen of Greenland police, who have moved a search-and-rescue helicopter closer to the village, told The Guardian.

The iceberg’s threat occurs days after New York University (NYU) scientists captured stunning footage of another four mile iceberg breaking off of a Greenland glacier, and both serve as reminders of the speeding pace of ice melt and the growing danger of sea level rise.

David Holland, one of the NYU researchers who captured the footage, put the iceberg’s presence near the village in context for people who don’t encounter massive floating ice in their daily life.

“It’s kind of like, if you lived in the suburbs, and you woke up one morning and looked out, and there was a skyscraper next to your house,” Holland told NPR. “I’d be the first to get out of there.”

While Innaarsuit council member Susanne Eliassen told The Guardian that it was not uncommon to see large icebergs close to her community, this one was unique.

“[T]his iceberg is the biggest we have seen … and there are cracks and holes that make us fear it can calve anytime,” she said.

The current threat comes a year after a landslide caused a tsunami that killed four and injured 11 in Nuutgaatsiaq, Greenland, and it’s a risk that Geological Survey of Denmark and Greenland researcher William Colgan told The Guardian is likely to get worse as temperatures warm.

“Iceberg production in Greenland has been increasing in the past 100 years as climate change has become stronger,” he said.

The village of about 170 has both its power station and fuel tanks located close to the shore, The Guardian reported. Adding to the danger is the fact that residents don’t know how to swim.

“There’s only one swimming pool in Greenland. It’s in Nuuk, which is much further down the coast than this village that we’re talking about,” University of Leeds glaciologist Anna Hogg told NPR. “If you think about it, why would they be able to swim? The ocean water is just so cold; you can’t even put your toe in without it being unbearably freezing.”