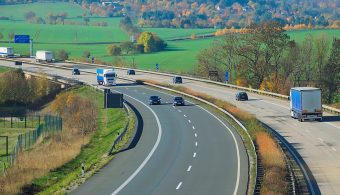 A stretch of a prominent Germany highway just got a high-tech upgrade: overhead power lines — like the ones you only see over rail tracks — that can power hybrid trucks.

The German government announced that a 6-mile (10 km) stretch of the autobahn got the upgrade, a test that could pave the way for a new carbon neutral strategy to transport goods.

The system, developed by German conglomerate Siemens in 2012, allows hybrid trucks to charge their batteries while traveling at speeds of up to 56 mph (90 km/h).

Similar stretches of electric highways have been built in Sweden and the United States. Other solutions for charging electric vehicles while on-the-go include rails built into the asphalt.

Electrifying truck transportation could also save a tonne of fuel: 20,000 euros’ worth for every truck traveling 62,000 miles (100,000 km), according to Siemens’ website.