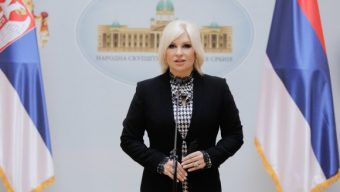 Photo: Ministry of Mining and Energy

Yesterday, two new laws were discussed – on the use of renewable energy sources, and energy efficiency and rational use of energy, as well as the amendments to the Law on Energy and the Law on Mining and Geological Research.

The Minister of Mining and Energy Zorana Mihajlović said that the laws in mining and energy, which are being defended before the deputies today, represent an important step for the national energy policy to become sustainable and responsible towards the environment.

“The Government of Serbia is determined to be a part of the great changes that are happening in the world, including the process of energy transition and climate-neutral development”, Mihajlovic said in the National Assembly before the beginning of the debate.

She explained that the laws create a better environment for investments by digitalizing the procedures by introducting of e-energy and e-mining and taking care of energy-vulnerable customers, including electricity and gas customers, and the customers of heat energy.

On the other hand, the Regulatory Institute for Renewable Energy and Environment (RERI) demands that the Government of the Republic of Serbia urgently withdraws the proposed amendments to the Law on Mining and Geological Research from the parliamentary procedure, as they consider to be unconstitutional, because it gives the possibility to the state to formally suspends, at its own discretion, the legal order of the Republic of Serbia during negotiations with foreign investors.

Namely, the state could conclude the so-called investment agreement with the investor in the exploitation project, that would regulate in more details “relations regarding the construction of the missing infrastructure, environmental protection, the right to preemptive purchase of products in favor of domestic processors, fiscal and legal benefits related to the project.”

“In this way, it is theoretically possible for the state to release a privileged investor from the obligation to obtain consent for a study on environmental impact assessment in projects in which obtaining it based on the Law on Environmental Impact Assessment is necessary.”

RERI announced that if the Government of Serbia does not withdraw the disputed changes from the procedure, and the law in this form is adopted in the Assembly, immediately after it comes to force, they will submit an initiative to the Constitutional Court to assess the constitutionality of those provisions they consider to be unacceptable and unconstitutional.