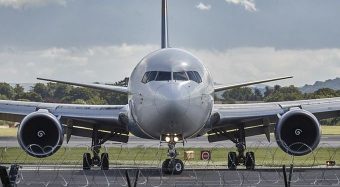 The intense heat wave that’s been gripping much of the western US in recent days has actually forced the cancellation of a number of flights out of Phoenix, Arizona — owing to the simple fact that the Bombardier CRJ aircraft to be used for the flights in question weren’t designed to operate above 118° Fahrenheit.

And, of course, the temperature in Phoenix on Tuesday, when the flights were cancelled, was over 118° Fahrenheit.

To be more specific here about the details, American Airlines reportedly cancelled 50 flights out of Phoenix Sky Harbor aboard Bombardier CRJ aircraft on Tuesday — a fair amount of business to cancel, but I guess that there was no safe choice other than cancellation. The primary issue is apparently that hotter air usually means thinner air, which can make takeoff an issue, depending upon other variables.

Providing some background to the news, Climate Central noted in its coverage: “All-time record hot or not, the extreme weather has the potential to be life-threatening. The National Weather Service has issued an excessive heat warning and its Phoenix office has said ‘heat of this magnitude is rare, dangerous and very possibly deadly.’

“Perhaps it’s no surprise these cities could be in line to set records. Phoenix is the second-fastest warming city in the US over the past 50 years while Las Vegas comes in at third and Tucson at seventh. Climate change is largely responsible for boosting those background temperatures, increasing the odds of setting record highs like the ones currently broiling the region. The heat island effect only compounds the risks of deadly heat in cities.”

While the recent extreme heat in the southwestern US will probably lead to some people taking a second look at global warming (or heating) and climate change science and predictions, I wouldn’t count on there being any major change in the demographics of belief — people tend to forget by the time that winter rolls around (seriously — year after year), and jokes can be made about how maybe climate change won’t be a bad thing.

The news concerning flight cancellations is interesting, though, as it serves as example of the way that rising temperatures will impact services and infrastructure in ways that are at first not obvious. Expect to see more of the same over the coming years and decades, as rising temperatures bring down quite a number of the services and infrastructure that modern industrial society depends upon.