New battery technology could give electric cars more than 200 miles of charge in as little as 10 minutes, according to new research.

Lithium ion batteries have had a dramatic impact because of their ability to store a large amount of energy in a small, compact battery and be recharged again and again. A trio of scientists were awarded the Nobel prize in chemistry for their contributions to the development of the batteries earlier this month.

However, lithium ion batteries also present a worry for drivers: that their vehicle will run out of power mid-journey and leave them potentially facing a lengthy recharge.

Now scientists say they are addressing the issue by making it much quicker and easier to charge the battery, meaning cars will spend less time at charging points and get back on the road faster.

“If we have a ubiquitous fast-charging infrastructure on the roadside, drivers need no longer to worry about the cruise range. After driving 200-300 miles per charge, one can pick up another 200-300 miles by charging for 10 minutes,” Dr Chao-Yang Wang, a professor at the Pennsylvania State University and co-author of the study, told the Guardian.

Rapid charging in a matter of minutes requires a high current. However, at low temperatures – even at 30C (86F) – such charging of lithium ion batteries can cause problems as metallic lithium forms in spikes around the anode. Higher temperatures of about 60C (140F) would allow the lithium ions to move fast enough to avoid this problem – but keeping a battery hot can also result in problems.

The formation of such films take time, he said. As a result, the team came up with the idea of keeping the battery at 60C for just long enough to charge it up.

To do so, the team developed a battery that uses thin nickel foil to create an internal self-heating structure. By heating the battery to 60C, then cooling it to room temperature, they were able to charge the battery to 80% in 10 minutes but avoid damaging it, even when repeatedly charged in this way. A Tesla Model S currently takes 40 minutes to charge from a flat battery to 80% using a supercharger.

While the team used single cells of smaller capacity, about 10 amp hours, in their study, they say the technology could be applied to develop a battery for an electric car.

“We can charge batteries of different sizes with the same [charging] time as long as the charge current increases proportionally with the battery size,” said Wang. “For car battery of 150 amp hours, a fast charge station would have to provide a 900 amp current for 10 minutes.”

That, he said, was already feasible with existing fast chargers.

The future, Wang said, looks bright. “Our technology is simple but elegant … I guess that it will take two to three years of in-vehicle testing and evaluation before it is used in commercial vehicles.”

Prof Clare Grey from the University of Cambridge, who was not involved in the study, welcomed the research. “The interesting point is that it suggests that the positive effects of heating – reduced lithium plating – outweigh the considerable degradation processes that kick in at higher temperatures,” she said. But, Grey added, there is a long way to go, saying that the approach now needs to be scaled up to larger battery packs while there could be other degradation mechanisms that need to be considered. “But,” she added, “it’s important to challenge conventional wisdom and come up with innovative approaches.” 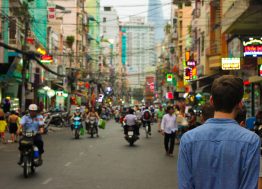 Entrepreneur Hoping to Make Electric Motorbikes a Staple of...