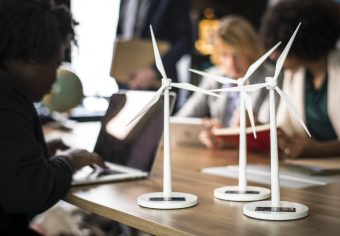 Ecotricity has said it plans to finish construction of its 6.9MW Alveston wind farm in Gloucestershire by the end of the year, capping a week of progress for the UK’s onshore wind energy industry as developers seek to bring online the final wave of projects to secure approval ahead of the government’s controversial halt to new subsidies.

Located near the junction of the M4 and M5, the three-turbine Alveston site will be Ecotricity’s second wind project in its home county, after its Nymphsfield wind turbine was built 21 years ago in December 1996.

Initial work on the Alveston site to create onsite access tracks has already begun, with full construction work on the crane pads, foundations and substation due to get underway in the Spring, Ecotricity revealed yesterday.

The green energy provider also said it plans to set up a community benefit fund for the wind park that is expected to make almost £7,000 available every year for local sustainable energy, transport, and food projects.

The turbines are expected to be delivered in October 2017, before they are erected and connected to the national grid by December, said Ecotricity.

On Wednesday the final rotors were lifted into place at the 15-turbine Tommywheel wind farm in Scotland, which is a joint development between Muirhall Energy and WWS Renewables. The site is expected to have a total generating capacity of 30.75MW, producing enough electricity to power 24,000 homes once it comes into full operation later this year, according to the developers.

And, the same day also saw completion of a 2.75MW, three-turbine extension to the Burton Wold South wind farm near Kettering, bringing the site’s total generating capacity to more than 20MW. The Northamptonshire site is a joint project between Muirhall, WWS Renewables and Infinergy.

The Hamilton-based firm has signed an agreement with local social enterprise Netherthird Community Training (NCAT) that would provide a variety of traineeships for 17-24 year-olds, ranging from four to eight week courses to year-long placements.

The trainees will undertake landscape management, habitat creation, general groundworks and land management duties at the proposed wind farm should plans for the facility get the go-ahead by the council.

East Ayrshire Council is set to determine its view on Banks Renewables’ planning application at a committee meeting at the end of this month, according to Banks Renewables.

“The NCAT scheme is exactly the type of programme that we strive to support with our community wind farms and I really hope that we get a positive planning decision for this project, which will deliver huge socio-economic benefits for the people of this part of East Ayrshire,” said Banks Renewables’ community relations manager Lewis Stokes.

A number of new wind farm projects are continuing to proceed having entered the planning system ahead of the government’s controversial decision to block new wind farms from accessing subsidies available to other forms of clean energy.

However, some within the industry remain optimistic a route to market for onshore wind farms can still be developed, arguing that improvements in technology means that new projects can generate power at a price lower than any other form of new generation.