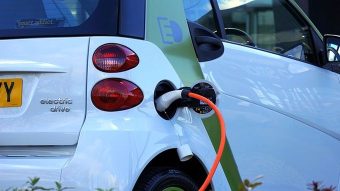 After having received €100 million in funding, Dutch online grocery store Picnic just announced aggressive expansion in the years ahead, including the procurement of a staggering 2,000 electric delivery vehicles.

Picnic, a young company operating in the Netherlands, seems to have reinvented grocery shopping in a way that changes pretty much everything about it for the better. Instead of having to go to a store, one can order online using Picnic’s App, after which your groceries will be delivered for free within a one-hour timeslot of your choice. This happens, no less important, by an electric delivery vehicle, meaning air pollution or carbon emissions will not leave its tailpipe (well, it doesn’t have a tailpipe).

As the startup doesn’t have to maintain a physical store, it can offer its delivery service for free, while even charging a lower price than its competitors. The online supermarket literally guarantees its products cannot be found anywhere cheaper. When Picnic just started its operations back in September 2015, I wrote an article about it here on CleanTechnica. In that article, I elaborated on Picnic’s business model, potential, and practices. The company has been growing at a remarkable pace ever since.

Starting off with 150 customers 1½ years ago, Picnic now serves over 30,000 households. It made €30 million in total revenue in 2016. Picnic is currently only operating in several cities in the middle of the country, but is about to expand to cover almost all of the Netherlands in the coming 3 to 5 years. For that, the company requires vast sums of capital, part of which it already attracted in the form of a €100 million investment by privately owned private-equity fund NPM Capital. The money will be used to erect 5 new warehouses and 70 distribution hubs, hire 2,000 employees this year alone, and expand its current fleet of electric delivery vans to what will probably become the largest EV fleet any company has ever owned — in fewer than 5 years, Picnic wants to put 2,000 electric cars on Dutch roads.

Picnic operates “E-Worker” commercial utility vans it bought from the French company Mega, which states its EVs have a range of roughly 110 kilometers on a full charge. That’s enough to operate in densely populated areas, but not sufficient to extend delivery service to rural areas. Mega has now rebranded itself as Goupil and no longer offers the exact model Picnic currently uses on its website. Whether this means Picnic will have to procure somewhat different vehicles remains to be seen.