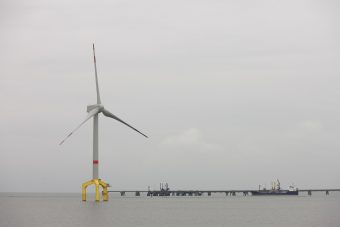 The offshore wind industry yesterday marked the end of an era, as Danish utility DONG Energy announced it is to decommission the world’s first offshore wind farm after 25 years of service.

The company said it is to bring the Vindeby wind farm off the south east coast of Denmark back onshore, completing the first full project cycle for an offshore wind industry that over the past quarter of a century has been transformed from something of a curiosity to a multi-billion pound player in Europe’s clean energy transition.

The 11 turbine project underlines the progress that has been made in recent years, as the industry has scaled up and slashed the cost of offshore power.

The turbines, which were connected to the grid in 1991, are located just 1.5 kilometres offshore, are 54 metres tall, and provide power to around 2,200 households.

In contrast, DONG Energy said its latest Hornsea Project One development will connect 174 turbines located 120 kilometres offshore to the UK grid, with each turbine towering 190 metres above the waves, and the project delivering enough power for one million households.

“Vindeby Offshore Wind Farm is almost miniature-size in comparison with the giant projects which are now being realised in Northern Europe,” said Leif Winther, head of DONG Energy’s Danish offshore wind farms. “But without the experience gained from the world’s first offshore wind farm, we wouldn’t be where we are today. It’s fair to say that Vindeby is the cradle of the offshore wind industry, and that this is where the industry was born.”

The decommissioning project is also expected to highlight how offshore wind farms can be removed fully from the water, minimising the long term impact on marine habitats.

DONG Energy said the blades, nacelle and towers will be dismantled and the concrete foundations will be broken down on site and then collected afterwards. The bulk of the turbine components will be re-used or recycled, while one turbine will also become part of an exhibition at the Danish Museum of Energy.

The milestone comes as the offshore wind industry recently confirmed it has slashed costs by nearly a third over the past four years, beating a UK government target to deliver power at less than £100/MWh by 2020. The sector is also investing heavily in a new generation of technology innovations which are designed to bring costs down further.

Winther said the first generation of offshore turbines had played a key role in the industry’s cost reduction efforts.

“Vindeby Offshore Wind Farm has played a decisive role in scaling up the technology and reducing the costs to a level that makes offshore wind attractive to many countries facing replacement of end-of-life coal-fired power plants with new green energy sources,” Winther said.

In related news, DONG Energy this week announced it had entered into a partnership with Aggregated Micro Power Plc that will see it use the Ashford Power gas-fired power plant to help provide balancing services for its wind power fleet.

“As a company responsible for balancing the world’s largest wind portfolio, we have a constant focus on the short-term market which makes an asset like Ashford Power a natural fit,” said Søren Scherfig, head of trading and portfolio management at DONG Energy. “Given the highly flexible characteristics of the asset and our market insight, we look forward to realising its full potential.”