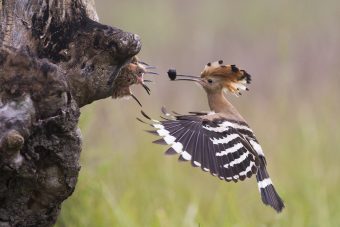 During the competition, which was jointly organized by the Energy Portal and the project “EU for Natura 2000 in Serbia”, from September 14th to November 27th, more than 1500 photos arrived.

The exhibition of the photo competition “Natura 2000 in the frame” will be opened on March 5th, 2021 in Kalemegdan.

All participants, both professional and amateur photographers, showed exceptional skills to capture and perpetuate an unforgettable moment in nature.

The winner of the competition, Levente Szekeres, has been photographing nature since 2011. He has won numerous awards and participated in several exhibitions in Serbia and abroad. “Each year, I make holes in the trees at the territory of Subotica sandstone. I am the happiest when I see chicks in the holes since I know that all my efforts have paid off. That is how my winning photo was created. I was checking the holes and I ‘caught’ the right moment of feeding the chicks”, explained Levente, who will use the prize of 60,000 dinars to buy a new lens.

Violeta Milutinović, who won 45,000 dinars as the second prize, plans to invest that money for the trip to Sjenica. There she will wait to catch the photo of a wolf which is the only one missing from her collection of nature photographs. So far, she has participated in 250 exhibitions in 30 countries worldwide and has won more than 200 awards and commendations for her work. Violeta was happy to participate in this competition, because, as she says, “she has an impression that the nature photographs have been unfairly marginalized.”

The third prize winner at the competition, Anica Župunski, a doctor by vocation, who has been engaged in photography for two decades, won 35,000 dinars with her Tisa mayfly. “For me, photography is a step into the world of beauty. Medicine’s essence is the relationship with a human being, great love and respect for the life that person carries within. I think we all have potentials which we express in different ways. For me, it is photography”, says Anica, whose Tisa mayfly has participated in 18 exhibitions so far and won six awards.

The jury consisted of Ana Iñigo on behalf of the EU project for Natura 2000 in Serbia, Antoine Avignon from the EU Delegation to Serbia, Snežana Prokić from the Ministry of Environmental Protection, photographer Bojan Džodan, multimedia artist Mina Radović and the Editor in Chief of Energy Portal Nevena Đukić.