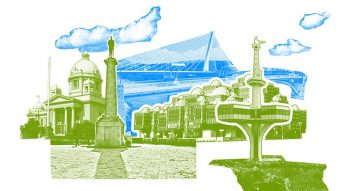 The Council of Europe Office in Belgrade and the Heinrich Böll Foundation’s Office in Belgrade invite you to take part in a discussion on human rights and environmental litigation in Serbia that takes place in the context of the 70th anniversary of the European Convention on Human Rights.

That said, none of those cases has been filed by a Serbian citizen. This discussion will attempt to uncover the underlying reasons and to explore the path of human rights protection mechanisms as a possible way to strengthen the standing of environmental protection cases in Serbian courts.

The introductory remarks will be delivered by Tobias Flessenkemper, Head of Office of the Council of Europe in Belgrade, Simon Ilse, Director of the Heinrich Böll Foundation’s Office in Belgrade, and Daniel Mohseni Akhavan, Political Advisor at the Embassy of the Federal Republic of Germany, on behalf of the ongoing German presidency of the Council of Europe’s Committee of Ministers. Natalia Kobylarz, Senior Lawyer at the Registry of the European Court of Human Rights, will present the relevant environmental case law of the European Court of Human Rights.

Specific focus will be given to cases concerning countries that have recently joined the European Union and to environmental concerns that are most relevant to the Serbian context.

The panel discussion will be attended by Mirjana Drenovak-Ivanović, Associate Professor at the Law Faculty of the University of Belgrade, Danijela Sinđelić, Prosecutor at the Basic Prosecutor’s Office in Obrenovac (tbc), Nebojša Zelenović, former Mayor of Šabac, and Jovan Rajić, Chairman of the Managing Board at the Renewables and Environmental Regulatory Institute. During the first part of the discussion, the speakers will explore the reality of environmental litigation in the courts of Serbia and the challenges faced by those seeking justice. The discussion will continue by examining the possibilities for Serbian legal professionals, authorities and wider public to improve the standing of environmental cases in Serbian courts, including through the human rights path.

The Zoom link will be provided before the event. The stream will also be available on the Facebook pages of the Council of Europe Office in Belgrade CouncilofEuropeBelgrade and of Heinrich Böll Foundation’s Office in Belgrade.