The Spix’s Macaw, a bird many would recognize as the star of the animated film Rio, is officially extinct. The macaw has been listed among eight bird species that have gone extinct in South America in the last decade in a new study conducted by BirdLife International. While the majority of bird extinctions are associated with island species sensitive to invasive organisms and hunting, these new extinctions are linked to a growing problem in South America: deforestation. 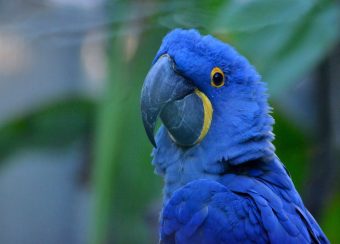 Stuart Butchart, a scientist who lead the BirdLife International study, said that the extinctions in South America are proof that a crisis is currently unfolding in places that have historically been free of such events — and it’s all because of the destruction of natural habitats.

In the past, about 90 percent of bird-related extinctions have been isolated to species on remote islands. But as Butchart points out, the new study indicates a rise in extinction events on large continents that are “driven by habitat loss from unsustainable agriculture, drainage and logging.”

As it currently stands, there are more than 26,000 species on the verge of extinction. With that number continuing to rise, scientists warn that humans could usher in another global extinction event.

Half of the birds that recently went extinct were native to Brazil. The Spix’s Macaw was last sighted in the wild in 2000, though the bird is being raised in captivity. Scientists hope to reintroduce the bird at some point in the future.

But that is not the case for many of the birds who have disappeared. The Alagoas Foliage-gleaner, the Cryptic Treehunter and the Poo-uli, for example, will never be seen again.

Apart from the eight bird species that have already gone extinct, there are 51 others that are “critically endangered.” Butchart and his team hope that their findings will promote future conservation efforts to save these bird species from becoming extinct.