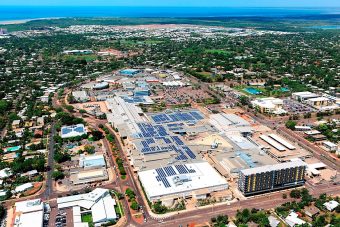 The 4190 solar panel rooftop has enough output to power 310 average Australian households and reduce greenhouse pollution by more than 1300 tonnes of CO₂ per annum, according to GPT. “Solar is playing a key part in GPT’s strategy to move all of the base buildings it manages towards carbon neutrality,” GPT’s national manager sustainability Bruce Precious said.
“GPT is reviewing all of its buildings with large rooftop areas across Australia to assess whether they are suited to solar systems. In addition to Casuarina Square, we have large solar installations in several of our assets including 3 and 5 Murray Rose at Sydney Olympic Park and Rouse Hill Town Centre.” The system, with an estimated annual output of 2030 MWh (megawatt hours), has already started providing around 20 per cent of Casuarina Square’s base building and common area electricity needs. The solar installation has also been granted approval to connect to the electricity distribution network that provides power to residents and businesses in the Northern Territory.

Having spread across the roofs of more than 1.4 million homes, many businesses are now jumping on the solar bandwagon. Casuarina Square follows Stockland’s massive solar project at its Shellharbour shopping centre. The property group’s solar installation is 1.22 megawatts. “Stockland is proud to be leading the sector in sustainability and investment in renewable energy, and it’s great to hear that others in the industry are following our lead,” Daniel Buchanan, regional retail manager at Stockland said. “We’re already planning more new solar power generation installations across our portfolio to increase our use of renewable energy.”
IKEA, the world’s biggest furniture retailer, is another company taking big steps in renewable energy. The company wants to be energy carbon-neutral by 2020, with 100 per cent of its energy needs coming from renewable sources. Last year IKEA’s Australian businesses installed 16,000 solar panels on the roofs of its six stores, including almost 4000 panels at its flagship Tempe store near Sydney airport.

Other companies such as Coles, Telstra, Google and Australia Post are also going solar. Investment bank UBS said in a report in September that large-scale solar looks set to usurp wind power from its long-held position as the cheapest new renewable energy source in just a few years. The global utilities research team believes solar power could account for a quarter of the world’s installed power generation capacity by 2050.
Source: Financial Review