The Danish beer company Carlsberg is doing its part in cutting down plastic waste. The brewing company just vowed to stop using plastic six-pack rings to hold its cans together, instead opting for glue. Once the new policy is in full swing, Carlsberg estimates it will save around 1,200 tons of plastic every year. 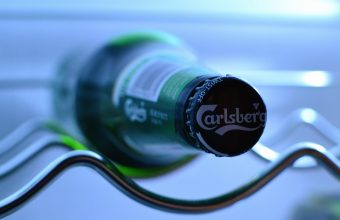 CEO Cees ‘t Hart explained how Carlsberg experimented with some 40,000 variations before settling on the perfect glue. Hart described the glue as something similar in consistency to chewing gum and says it is just as effective as traditional plastic rings.

Carlsberg plans on debuting its glue-based six packs in Norway and the U.K. before distributing them around the world. Hart would not say how much the company invested in researching the new glue. The CEO did, however, assure customers that the price of Carlsberg beer would not go up with the new packaging. Instead, the company plans on using previous cuts to help pay for the new glue.

Although Carlsberg invested heavily in the new glue, the company does not own the rights to the substance and hopes that other brewers will follow its lead. For reference, the glue does not stick to the hand once the cans are separated. Each six-pack will still feature a tiny plastic handle to make it easier to carry around.

The new glue is not the only way in which Carlsberg is becoming more eco-friendly. In addition to ditching the traditional plastic rings, the company is improving the technology surrounding its recyclable bottles. Carlsberg is planning on using an extra layer of protection on each bottle that will increase its lifespan.

The brewer has also created a new bottle cap that keeps the beer fresher and a different type of label ink that is more sustainable. It is yet to be determined if the moves will improve sales, but Carlsberg is definitely taking steps in the right direction for the environment.