Tiny amounts of cocaine flushed into rivers cause eels to become not only hyperactive but to suffer from muscle wastage, impaired gills and hormonal changes, a study has found. 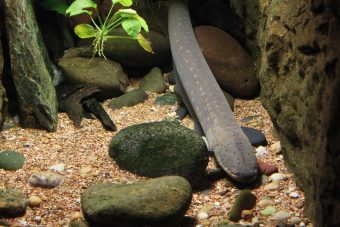 The impact of traces of cocaine on the physiology of European eels could be hindering their epic migrations through the oceans to reproduce, according to researchers who examined the impact of the drug.

The tiny concentrations of cocaine in the laboratory tests are equivalent to the trace levels found in rivers and water systems from illegal drug use, particularly near major cities.

Eels were exposed to 20 billionths of a gram of cocaine per litre (20ng/l) of water for 50 days. The cocaine-exposed eels appeared “hyperactive” and their skeletal muscle showed evidence of serious injury, including muscle breakdown and swelling.

Even after going into “rehab” – clean waters – for 10 days the eels were still found to have damaged muscles and increased cortisol levels. This stress hormone can cause fat wastage, and endangered European eels require fat reserves to make a successful migration to the Sargasso Sea in the west Atlantic, where they breed.

“All the tissues affected by cocaine play a key role in the fish survival,” said Anna Capaldo of the University of Naples Federico II and the lead author of the study, published in Science of the Total Environment.

Earlier studies have found cocaine in many European rivers, including in Italy and in the Thames near the Houses of Parliament and Chiswick, west London.

The impact of illegal drugs as well as antibiotics and other pollutants on eels could be even more severe. Capaldo said: “A polluted river will not have only cocaine, but also, for example, THC, morphine, MDMA, pesticides, heavy metals, phenols and antibiotics. All these substances can interact with each other, and the resulting effects are unpredictable. So, the damages that a wild eel could experience depend on the type of contamination of the watercourse, that is related to the surrounding human activities.”

According to Capaldo, more research is required to examine how eels’ muscle damage may impair their migration and reproductive success and to establish precisely how cocaine causes so much damage to their physiology.