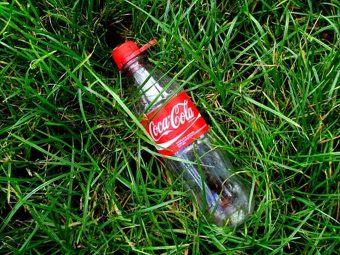 Coca-Cola increased its global production of single-use, throwaway plastic bottles by one billion in 2016, according to Greenpeace. Although the beverage behemoth does not publicly disclose its production numbers, an analysis by Greenpeace suggests a massive increase in output of plastic, which often ends up in landfills, water ways, or in large islands of trash floating in the ocean. The world’s largest soft drinks company contributes more than its fair share to a global plastic problem. It is estimated that by 2021, the global production of plastic bottles will reach half a trillion per year.

Although there is a massive number of plastic bottles in circulation and being produced each year, only a small number of them are recycled. Less than half of the bottles purchased in 2016 were then returned for recycling while only 7 percent of the collected bottles were reused to create new bottles. Where do these non-recycled bottles go? Most often, they are deposited in landfills or the ocean. Between 5 million and 13 million tons of plastic seeps into seawater, where it is then ingested by birds, fish and other aquatic wildlife. According to research by the Ellen MacArthur Foundation, there will be more plastic, by weight, in the ocean than fish.

Although Coca-Cola’s plastic bottle production increase poses a problem for the planet’s health, the global beverage corporation is taking some steps to clean up its act. In July 2017, Coca-Cola European Partners announced its goal of increasing the amount of recycled plastic in each of its bottles to 50 percent by 2020. However, this goal is viewed by critics as insufficient, particularly considering that bottles could be made out of 100 percent plastic. “Coca-Cola talks the talk on sustainability but the astonishing rate at which it is pumping out single-use plastic bottles is still growing,” said Louise Edge, oceans campaigner for Greenpeace. “We have calculated it produced over 110bn throwaway plastic bottles every year – an astounding 3,400 a second – while refusing to take responsibility for its role in the plastic pollution crisis facing our oceans.”