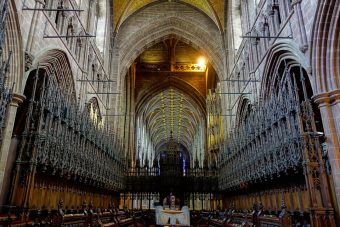 The UK’s historic churches are at serious risk from the impact of climate change, including higher levels of rainfall and invasive pests such as termites, according to the National Churches Trust. Roofs, towers and spires are threatened by strong winds and more frequent storms.

The trust saw a 26% year-on-year increase in applications for grants for urgent repairs, maintenance and development projects in 2017, its annual review says.

Claire Walker, the trust’s chief executive, said many church buildings had reached a tipping point due to the combined impact of climate change, cuts to Heritage Lottery Fund grants and the end of the government-funded roof repair scheme for listed places of worship.

“The intensity of extreme weather patterns, including heavier rainfalls and storms, is putting church gutters and drains under strain, and systems designed in the past cannot cope,” she said.

“Looking to the future, the impact of climate change could have a serious impact on the UK’s historic churches. Higher levels of rainfall in the UK, such as the 20% increase seen in Scotland since the 1960s, with more cycles of wetting and drying, will cause damage to timber and stonework. Stronger winds and more frequent storms will threaten roofs, towers and spires.

“Climate change is also making the UK ever more vulnerable to invasive pests. The biggest danger for church buildings would be from termites, which are now widespread in France, with infestations being found close to the Channel coast.”

Termites can cause extensive damage to structural timber. The pests excavate it from the inside, leaving a thin skin of unharmed wood which can conceal the damage being caused.

The only colony of termites known to have become established in the UK was found in south Devon in the 1990s. It was eliminated after years of action by government agencies.

Among the churches awarded grants by the trust last year were St Botolph’s in Boston, Lincolnshire, a Grade I-listed building and the UK’s largest parish church, which received £40,000 for roof repairs.

The Grade II-listed St David’s Old Church in Llanwrtyd, Wales, which has a recorded history spanning more than 1,000 years, received £20,000 from the trust for urgent repairs to stonework and gutters.