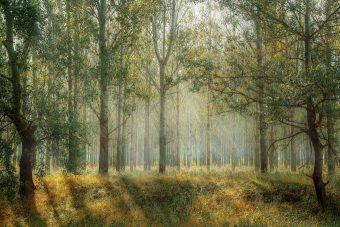 The range of the southern pine beetle could expand significantly further north than it now does within just a few decades as the result of increasingly warm winters in the regions in question, according to a new study published in the journal Nature Climate Change.

What the implications of the study are, in practice, are that before too long the southern pine beetle will likely be found in quantity throughout much of the northern United States and southern Canada.

Considering how rapidly southern pine beetles can destroy forests, especially those already weakened by drought and/or by centuries of clearcutting, the news should be disconcerting, as it means that many regions that are now carbon sinks will become net-carbon-emitters.

As it stands, essentially the only thing limiting the range of southern pine beetles are the cold winter temperatures that often occur in the northern parts of North America. What the research notes, though, is that average lows are rising much more rapidly than even averages as a whole are — in other words, the nights are warming in the regions in question much faster than even the days are, resulting in much lower beetle mortality rates.

According to study lead author Corey Lesk, these findings point to “huge vulnerability across a vast ecosystem. We could see loss of biodiversity and iconic regional forests. There would be damage to tourism and forestry industries in already struggling rural areas.”

Perhaps more notable, though, would be what would follow the events Lesk describes — that is, enormous forest fires across much of the north.

“Until recently, southern pine beetles lived from Central America up into the southeastern United States, but in the past decade or so they have also begun appearing in parts of the Northeast and New England. Substantial outbreaks began occurring in New Jersey in 2001. The beetles were first found on New York’s Long Island in New York in 2014 and Connecticut in 2015,” a press release explains.

“Lesk and Horton project that by 2020, the beetles will establish themselves along the Atlantic coast up to Nova Scotia. They say that by 2050, 78% of the 48,000 square miles now occupied by pitch pine forests from southern Maine to eastern Ohio will have climates newly suitable to the beetles. By 2060, they expect the beetle will further establish itself from southern New England through Wisconsin, and by 2080, climates suitable for the beetle should reach 71% of red pines and 48% of jack pines, which extend across more than 270,000 square miles of the northeastern United States and southern Canada.”

These figures are likely fairly conservative, as a result of the methodology used, so don’t be too surprised if the advance of the southern pine beetle is even faster than what’s discussed above.

A separate possibility, worth noting here, is that worsening climate instability would result in changes to atmospheric and oceanic circulation patterns. This could alter the expected outcome in various ways.