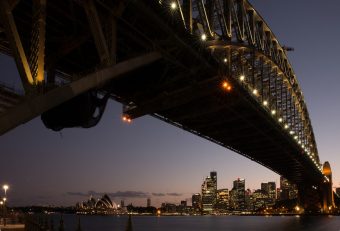 As of July 1, Sydney, the largest city in Australia, will power all its operations — street lights, sports facilities, buildings, and the historic Town Hall — with 100% renewable energy from local sources. The clean energy transition, made possible by a power purchase agreement put together by Flow Power, is worth $60 million and is projected to save the city more than a half million dollars on its electricity bills every year for the next 10 years.

Sydney began working to reduce its carbon footprint in 2016 when it adopted a plan to cut its carbon emissions 70% by 2030. The city calculates this latest power purchase agreement will help it reach that goal 6 years earlier than planned. It also worked hard to make sure the sources of the renewable energy it uses were all local to the area, providing economic development and job growth opportunities for people living in surrounding communities.

The PPA will use electricity from three sources — 2 solar farms and one wind farm. Three-quarters of it will be provided by the Sapphire Wind Farm near Inverell. It is the largest wind farm in New South Wales with a capacity of 270 MW generated by 75 turbines that stand 200 meters high. The reason wind is such a big part of the package is that the majority of the electricity the city consumes goes to power its 23,000 street lights. Sydney has converted about 6,000 of them to LEDs recently and has plans to convert another 12,000 soon.

“The process of buying energy from a generator when its output matches your demand is known as load matching. For example, if you use most of your electricity at night, like we do, you choose to buy more wind power than solar power. It’s not just a good idea financially — if every large energy buyer practiced load matching, our electricity grid would become much more stable and sustainable,” the city says.

Even though the wind blows at night when the city uses most of its electricity, Sydney is also sourcing renewable energy from two solar farms, one of which is a 3 MW community solar installation. The Shoalhaven project is being developed by Flow Power in partnership with local community group Repower Shoalhaven, a not for profit volunteer community enterprise that develops community solar projects.

“When we decided to pursue a 100% renewable electricity deal, we knew we wanted to help grow the renewables sector in NSW as well. We didn’t want to simply buy renewable electricity that was already being produced. So we worked with our broker to make sure we were supporting new projects,” the city says.

“We ended up partnering with a community energy group that needed help to get a project off the ground. Repower Shoalhaven could not have become operational without our investment. By partnering with this project, we’re stimulating the market and helping the renewables sector grow.”

Sydney has also installed solar panels on a number of municipal buildings. “By mid-2021, we expect to have more than 7,800 solar panels on the roofs of our properties. As the mix of storage and generation on our electricity grid changes, solar solutions like this could provide reliability and resilience to our electricity network and potentially prevent blackouts,” says Mayor Clover Moore. The city has installed a 500 kWh battery storage facility supplied by Tesla to help use that solar power as efficiently as possible.

While not nearly as large as the Tesla battery located at the Hornsdale facility in South Australia, together with all the solar panels the city is installing it helped prevent the construction of a natural gas peaker plant in the area which would have spewed carbon emissions into the air for all of its 40+ year service life.

Looking to the Future

In its online announcement about the new power purchase agreement, the city says, “Our new deal kicks in from 1 July but we’re already looking to the future and how our electricity use might evolve in the years ahead. As more Australian individuals and organisations generate power themselves using rooftop solar, the opportunities will increase for a 2-way system that involves energy users both buying and selling electricity. Many households in the City of Sydney area already sell their excess solar power back to the grid. There’s also the practice known as demand response. This is when consumers choose not to use electricity during times of high demand in exchange for lower rates or some other form of reward. The NSW electricity market is moving towards a demand response model and we’re going to be at the forefront of it. That’s why we’ve included provisions for demand response in our current power purchase agreement.”

The Australian national government may refuse to address climate change and stick its head in the sand when it comes to renewables — despite evidence that investment in renewables creates three times as many jobs as investments in fossil fuels — but local communities and state governments are defying the elected idiots and charting their own course to a sustainable future.