The City of Sydney, on Australia’s east coast, announced last week that it intends to further cut its greenhouse gas emissions by transitioning to 100% renewable energy to meet all its electricity needs starting next year. 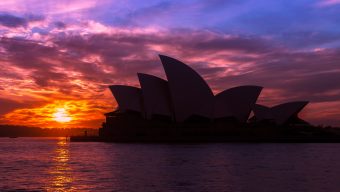 Sydney had already set significant climate targets for itself, including a 50% renewable electricity target by 2030 and a 70% reduction of greenhouse gas emissions by 2030, moving to net-zero emissions by 2050, but with the City’s existing energy contract set to expire at the end of 2019, it decided to dive “head first into Sydney’s renewable future” by increasing its renewable electricity target to 100%. Specifically, Sydney will purchase only 100% renewable energy that’s generated by wind or solar starting next year, with new contracts to be negotiated over the next few months.

“We’re increasing our renewable electricity target and achieving it earlier because our residents and businesses are demanding it, it reduces emissions and it will soon be cheaper than coal,” the City of Sydney’s sustainability director, Chris Derksema said. “The shift to renewable electricity is happening much faster than anyone imagined. We’re leading by example, with the hope of inspiring local residents and businesses to take action themselves.

“Visitors to our swimming pools, libraries, childcare centres and even Sydney Town Hall will know we’re playing our part.”

The new commitment has already been endorsed by the City Council and is expected to cut Sydney’s emissions by around 18,000 tonnes each year — equivalent to the power consumption of around 4,000 households.

“Acting on climate change is the City’s top priority,” said the City’s Lord Mayor, Clover Moore. “We were among the first to set science-based targets in 2008 and since then we’ve reduced our emissions by 20% on 2005 levels.

“This decision by Council will allow us to achieve our commitment to reduce emissions by 70%, ten years ahead of our own 2030 deadline, well on the way to net-zero by 2050,” she added. “The City’s strong economic position and the money we’ve saved by investing in energy efficiency allows us to act responsibly by committing to 100 per cent renewable energy.”

The new commitment builds on the city’s pioneering climate work which saw it become the first local government in Australia to achieve carbon neutral certification all the way back in 2011. The City of Sydney is also a member of the C40 Cities Climate Leadership Group — a network of 94 of the world’s largest cities representing more than 700 million people worldwide — and, through its existing targets and ambition, has reduced its emissions by 25% based on a 2006 baseline and is now on track to achieve a further 10,000 tonnes of direct reductions through efficiency initiatives over the next five years.

“For too long, our state and federal governments have failed to take action to address accelerating climate change. That’s why cities must lead the way,” said Clover Moore. “We’ve reduced our own emissions, and continue to work with our business community through the Better Buildings Partnership. This successful program has assisted members to save $33 million a year on power costs and reduce their emissions by 52 per cent since 2001, well over halfway to their 2030 target of a 70 per cent reduction.”

The City has also reduced electricity usage by 26% since 2006 through its investments in energy efficiency initiatives such as replacing 6,500 street lights with LEDs — which saved the city AU$800,000 a year in energy costs and reduced carbon emissions by 2,400 tonnes a year — and installing solar panels on more than 30 of its office buildings, pools, libraries, and community centers on its way to installing over 7,800 solar panels by mid-2021.