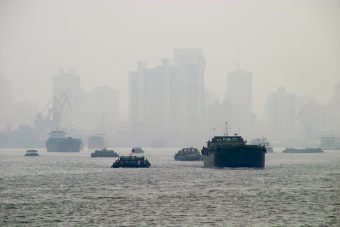 The Chinese premier, Li Keqiang, has promised to step up his country’s battle against deadly smog, telling an annual political congress: “We will make our skies blue again.”

China’s cities have become synonymous with choking air pollution in recent years, which is blamed for up to 1 million premature deaths a year.

Speaking at the opening of the national people’s congress in Beijing on Sunday, Li admitted his country was facing a grave environmental crisis that had left Chinese citizens desperately hoping for relief.

Li unveiled a series of smog-busting measures including cutting coal use, upgrading coal-fired power plants, slashing vehicle emissions, encouraging the use of clean-energy cars and punishing government officials who ignore environmental crimes or air pollution. “Key sources” of industrial pollutants would be placed under 24-hour online monitoring in an effort to cut emissions.

The premier vowed that levels of PM2.5 would fall “markedly” over the coming year but did not cite a specific target.

“Tackling smog is down to every last one of us, and success depends on action and commitment. As long as the whole of our society keeps trying we will have more and more blue skies with each passing year,” he said.

PM2.5 is a tiny airborne particulate that has been linked to lung cancer, asthma and heart disease.

Despite his buoyant message, Li’s language was more cautious than three years ago when he used the same opening speech to “resolutely declare war on pollution” and warn that smog was “nature’s red light warning against inefficient and blind development”.

There has been public frustration – and protest – against Beijing’s failure to achieve results in its quest to clean up the environment. Tens of thousands of “smog refugees” reportedly fled China’s pollution-stricken north last December as a result of the country’s latest pollution “red alert”.

Wei Song, a Chinese opera singer who attended Li’s speech, said it was inhuman to “achieve development goals by sacrificing the environment” and called for tougher measures against polluters.

“The government should increase the penalties in order to bankrupt the people and the companies responsible. Otherwise, if the punishment is just a little scratch, they will carry on polluting,” said Wei, one of China’s “three tenors”.

He claimed the number of smoggy days in Beijing was now falling thanks to government efforts and he said his province, which is building what could become the biggest solar farm on Earth, was also doing its bit.