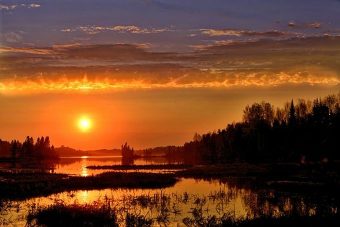 Average global temperatures keep rising. While 2016 is the warmest year on record, the previous record was set in 2015 and, before that, 2014. A new joint report from Health Canada and the Science Media Centre of Canada (SMCC) puts this into perspective.

This has resulted in “melting sea ice, changing precipitation patterns and thawing permafrost.”

Heat waves, such as the 2010 event that caused 280 deaths in Quebec, are becoming more common.

“There is no denying it and no doubt about it: our planet is warming and climate change is well underway, around the world and right here in Canada. And extreme heat events are one of the consequences. Periods of extreme heat are uncomfortable, but they can also exacerbate existing health conditions, such as asthma, and put people at risk for heat-related illnesses, even death,” it says on the SMCC website.

This situation will only get worse:

Given Canada’s plan to ramp up Alberta’s bitumen production 53%, to reach Premier Notley’s so called emissions “cap,” it seems very likely that the nation’s emissions will grow.