The former archbishop of Canterbury Rowan Williams has welcomed an “urgent change” by Cambridge University, after it agreed to provide fully costed plans setting out how it could divest multibillion-pound endowments from fossil fuel corporations. 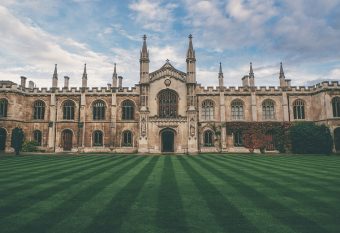 The university’s management accepted a motion, known as a grace, which urged Cambridge to “set out fully the advantages and disadvantages, including the social and political ones”, of divestment from global coal, oil and gas companies.

The grace, agreed without adjustments by management, follows an escalating campaign by staff and students concerned about Cambridge’s financial backing for the fossil fuel industry.

Williams said: “It is an important message to our own society and national institutions, but also to all those vulnerable populations across the world who are most at risk from climate change; and it is good to see that clear and focused advocacy in the university has produced so welcome and urgent a change.”

The grace was signed by 324 academics, which campaigners said represented one of the largest totals in the university’s history.

The academic and Green party MEP candidate Jeremy Caddick, who helped push the motion, said: “Two years ago, we asked the university to divest from fossil fuels. Since then, the administration has done everything it can to avoid the question, so I am delighted that the council have accepted this latest grace.”

This year, Clare Hall, the college of the vice-chancellor, Prof Stephen Toope, became the latest to commit to fully divest funds from fossil fuels. The college also said it would withdraw money invested in the university’s £3.2bn central fund if it did not divest within five years.

Awareness of the scale of the ecological crisis has been growing. Last month, more than 1,000 people were arrested during civil disobedience protests across London. Last week, parliament became the latest body to declare a climate emergency. And on Monday, a UN report detailed the urgent threat to human society from the loss of Earth’s natural life.

Campaigners say Cambridge is too closely entwined with the fossil fuel industry. In January, the Guardian revealed the university had been offered two multimillion-pound donations from global fossil fuel corporations at the same time it was considering calls to divest its endowment fund.

The author and Cambridge academic Robert Macfarlane said it was time for the university to act with urgency. “It is good news that Cambridge has at last accepted the need to re-evaluate its position on divestment,” he said.

“Every week, new research, some of it coming out of Cambridge itself, further clarifies the severity of the climate crisis and the speed with which change is happening.”

A spokesperson for the Cambridge zero carbon society, the group campaigning for divestment, said: “The university must produce costed strategies for how it can divest, alongside an evaluation of the social and moral factors in divestment, as hundreds of academics have demanded.

“This is a second chance for the university to end their complicity in the climate crisis and align its economic policy with the scientific evidence produced at this very institution.”

A spokesperson for the university said it recognised climate change was “a real and present danger” and had made two appointments to underline its commitment in the area.

Cambridge said Emily Shuckburgh from the British Antarctic Survey had been appointed as the first director of the university’s carbon futures initiative.

Toope described it as a critical role. “Emily is the ideal person to lead this initiative, which will pool research from across the university to address the greatest challenge the world faces today,” he said.

The university has also appointed Ellen Quigley to “work with the chief financial officer to establish a programme of research into responsible investment”.