California became the first state in the U.S. to ban plastic straws in dine-in restaurants Thursday when Governor Jerry Brown signed legislation to that effect, the San Francisco Chronicle reported.

The law, which will enter into force Jan. 1, prohibits restaurants from providing straws unless a customer requests one. It covers only sit-down eateries, not fast food restaurants, delis or coffee shops.

“It is a very small step to make a customer who wants a plastic straw ask for it,” Brown said as he signed the bill. “And it might make them pause and think again about an alternative. But one thing is clear, we must find ways to reduce and eventually eliminate single-use plastic products.”

The law, Assembly Bill 1884, was passed by the state legislature in late August. Restaurants who violate the law could be fined $25 per day and up to $300 per year, CNBC reported. 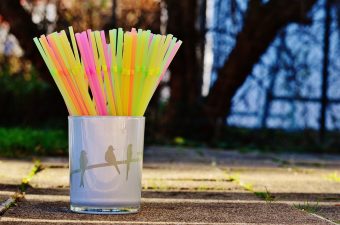 The law comes as various cities and companies, including California cities like San Francisco, Alameda, Oakland, Berkeley, Carmel, Davis and San Luis Obispo have also passed restrictions on the use of plastic straws, the San Francisco Chronicle reported.

The move was supported by some of the same groups who supported the state’s ban on plastic bags, which was solidified by a voter referendum in 2016.

In his signing statement, Brown focused on the impact that all single use plastics have on the oceans. He wrote that plastics are estimated to kill millions of marine animals, referencing the story of a whale that washed up dead in Thailand with 80 plastic bags in its stomach, and that microplastics have also been foundin tap water.

“Plastics, in all forms—straws, bottles, packaging, bags, etc.—are choking our planet,” he wrote.

Plastic straws and stirrers are the sixth most prevalent form of trash found on California beaches, according to the California Coastal Commission, the San Francisco Chronicle reported.

However, anti-plastic straw measures have been criticized by disability rights activists, who say they deny people with disabilities a life-saving accessibility tool without addressing the true cause behind the single-use plastic crisis.

“Let me be blunt: Screeching at us about straws is not going to fix the problem of plastic. For that, we need to go higher up the supply chain, rethinking when and how we produce plastics across the board instead of shaming disabled people who are piping up about our needs,” Northern California journalist s.e. smith wrote for Vox.

Some disability advocates say a solution like California’s, which still allows restaurants to serve plastic straws upon request, would resolve the tension between sustainability and accessibility, but others say such regulations still put an added barrier between customers with disabilities and their chance to enjoy a beverage out as easily as anyone else.

“Some people who need straws may have an invisible disability or illness, and they should be able to receive a straw without being judged or asked if they ‘really’ need it,” the Mighty disability editor Karin Willison told the Los Angeles Times, as reported by The Hill.