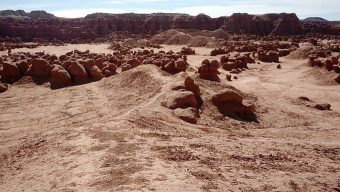 Biologists from Abu Dhabi and the United Arab Emirates have engineered a new form of microalgae that can grow rapidly in desert conditions, a discovery they claim could be used to sustainably produce biofuels, animal feed and other bio-based products in otherwise barren environments.

The researchers set out to discover whether they could boost the productivity of algae in very bright light, which is usually harmful to cells. They genetically engineered a form of microscopic algae known as diatoms, to boost its ability to grow and divide under desert light conditions.

Because diatoms are found in marine environments they don’t require freshwater for their production, meaning they could be produced in regions where freshwater is scarce.

The team, from NYU Abu Dhabi and UAE University, envision a cluster of “cell factories” in the Middle East that can produce high value bio-based products using little energy, and say they have already identified promising strains of diatoms in the UAE.

The algae can also be used to produce biofuel and animal feed, they suggest, with the added benefit of ingesting CO2 and emitting oxygen in the process.

“With this technology, algae can be grown in photo-bioreactors at a higher density and a faster pace, reducing cost and speeding up production,” said Weiqi Fu, PhD, a Research Scientist at NYU Abu Dhabi and the lead researcher of the study.

The breakthrough is a promising sign that in the future biofuel, animal food, fish feed and other types of production could be shifted to unproductive desert lands, relieving pressure on agricultural land.