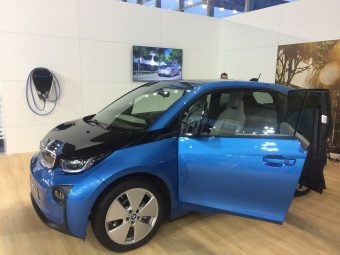 When the BMW i3 went on sale in the U.S. back in May 2014, it marked not only the debut of the German automaker’s first mass-market electric car, but also a new sub-brand.

BMW originally planned to group all its electric cars under the “i” sub-brand, which currently includes all-electric and range-extended REx versions of the i3, as well as the striking and expensive i8 plug-in hybrid coupe.

But as BMW looks to expand the number of electric cars in its lineup, that strategy may soon change.

The carmaker plans to offer all-electric versions of its regular models, starting with the 3-Series sedan, X4 crossover, and Mini Cooper, reports WardsAuto.

The industry trade journal cites a report from the German newspaper Handelsblatt, which in turn is based on interviews with anonymous sources close to BMW chairman Harald Kruger.

The decision to sell all-electric versions of the 3-Series, X4, and Mini Cooper is partially motivated by the need to compete with Tesla Motors, and to match electric-car programs of other German luxury brands, the report said.

The 3-Series in particular is likely the vehicle most directly targeted by the Tesla Model 3, the 215-mile, $35,000 electric sedan unveiled by the Silicon Valley company in April.

It has already been reported that an all-electric power train will be offered in the 3-Series—BMW’s core model—as part of a 2018 redesign.

While it initially resisted the idea, BMW may also view offering electric power trains in its regular models as a less-expensive option than adding more dedicated “i” models.

Both the i3 and i8 use carbon fiber-reinforced plastic body shells and aluminum subframes that aren’t shared with other models.

This reduces the profit margin of these “i” models compared to the rest of BMW’s lineup.

In its latest 7-Series large luxury sedan, BMW has incorporated individual structural members of carbon fiber within a largely steel structure, meaning the dedicated CFRP body shells may not be needed.

BMW is expected to launch an i5 extended-range electric crossover in 2018, as well as a convertible version of the i8 and a new electric flagship sedan code named “iNext.”

To some extent, though, the move away from dedicated BMW plug-in models has already begun.

In the U.S., the carmaker offers plug-in hybrid versions of the 3-Series sedan, as well as the X5 SUV, and the 7-Series sedan will follow.

These models wear “i Performance” badges, but they have nonetheless obliterated the “i” division’s short-lived monopoly on plug-in hybrids within the BMW lineup.

Whether there will be any further dedicated “i” models after the i5 remains to be seen, but the shift in tactics underscores the slow spread of battery-electric power-trains across the lineups of more and more manufacturers.

In other words, electric powertrains aren’t just for special vehicles any more.