Scientists at the University of Buffalo have discovered an adept way of storing renewable energy thanks to wastewater produced from the textile industry. Polluted water containing blue dye, chemically referred to as methylene blue, has been found to have electrical properties and may soon be repurposed to revolutionize the battery industry in the near future. The revelation could help the textile industry, which is not known for its sustainable practices, reach a milestone in dealing with its water pollution and consumption issues. Similarly, for countries such as Sri Lanka where the textile industry makes up the majority of income, the discovery is paramount in facing the world’s changing environmental standards. 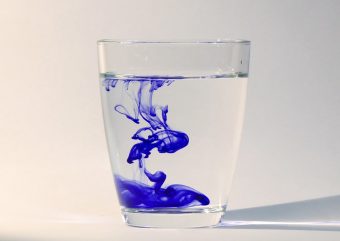 Only 5 percent of methylene blue is absorbed by fabric in the dyeing process, meaning that thousands of liters of dye are released by factories daily to produce the azure hues people love to wear. The rest of the dye, now infused into water sources, is simply thrown away. Discovering the electrical properties of methylene blue — which is also used as medicine in some blood diseases, urinary tract infections and cyanide poisoning cases — is a game changer for both the textile industry and countries where textiles are increasingly damaging the environment.

“The textile industry is what most of my country’s income is based on, but it’s associated with a lot of waste water, which is causing problems,” collaborating chemist and Sri Lankan national Anjula Kosswattaarachchi explained. “The good thing is we can repurpose the wastewater and create a green energy storage technology.”

The research, published last month in the scientific journal ChemElectroChem reveals how methylene blue molecules change form when voltage is applied to the compound. Two protons and two electrons are taken on by the deep blue dye to form leuco-methylene blue, a colorless byproduct.

This composition is then used by chemists in alternating reduction and oxidation processes, making it a successful alternative to current battery compositions. Using a solar cell to generate power, large quantities of the dye can be transformed into leuco-methylene blue. Alternately, the reverse process is employed at night when the electricity is needed back from the dye. Best of all, by varying the size of the cell in which the dye is subject to the voltage, the desired power output may be obtained independent of the size of the chemical storage tanks. This is a quality that other batteries, such as lithium ion models, do not have.

The configuration is being referred to as the redox flow battery, which is already available with vanadium solutions, however the near-perfect reversibility exhibited by the methylene blue composition will certainly create some competition. Kosswattaarachchi and PhD supervisor Tim Cook are now working on repeating tests with actual samples of waste water, which contain other chemicals as well as the methylene blue, and creating scalable models in an effort to refashion both textiles and renewable energy into more sustainable models.