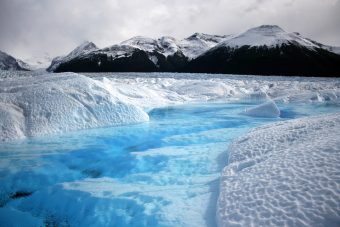 Over the coming decades, some of the rivers in Europe that utilize hydroelectric facilities to generate electricity are expected to see greatly reduced water flows due to the rapid disappearance of glaciers in the Swiss Alps.

As a result, some regions that are currently partly reliant upon hydroelectric capacity will have to partially transition to other sources of power. With that apparently in mind, execs at the France-based Compagnie Nationale du Rhone (CNR) hydropower group have begun making plans to greatly increase investment into renewable energy projects, reportedly.

This news follows on a drought last year that saw relevant water flows (at hydro facilities) reduced by 27%, accompanied by a drop to “just” 10.7 terawatt-hours (TWh) of electricity generation. That figure represents quite a drop from the record figure of 17.4 TWh worth of generation in 2013.

Expectations are that the river Rhone,which flows from Lake Geneva (which is fed by glacier melt) to the Mediterranean, will see its flow greatly diminished over the coming decades as the Alpine glaciers of the region continue disappearing.

Some predictions state that the flow of the Rhone will be diminished by 10%-40% in just faew decades, and perhaps more importantly, the flow that still exists will come increasingly in the form of violent floods.

“Scientists say the Alps’ glaciers could disappear by the end of the century. That does not mean they will, but we must act responsibly,” explained CNR CEO Elisabeth Ayrault, in an interview with Reuters.

As a result, the company will reportedly be increasing its investment into the renewable energy sector, and looking to boost renewables capacity by 5-fold in the near-term, reportedly.

“Our plan is to have as much capacity away from the river as on the river, probably by 2035,” the CNR CEO continued.

Reuters provides more: “CNR has 3,035 megawatt (MW) of hydropower capacity — making it France’s second-biggest hydropower producer after EDF — and has already built some 600 MW of mainly wind and some solar power since 2015.”

“By 2020, it wants to boost that to 1,000 MW and then accelerate renewables investment with a further 1,500 MW in 2020-2025 to eventually reach 3,000 MW of renewables capacity. Ayrault said the problem was not just slower flow rates but also increasing volatility. Last year’s drought was followed by 3 major floods in December-January. Floods also weigh on output, as CNR is forced to open dams to evacuate excess water.”

“What is worrying is the huge swings in river flow. We no longer have the regularity we had before,” she noted.

Climate weirding is occurring, in other words. Humans have gotten used to the relative climatological stability of the last few thousand years, but such stability can’t be counted on to continue. From here on out, owing to an increase in turbulence in the broader climate system (the result of the rapid release of greenhouse gases in recent times), the weather of the world will become less and less predictable.

The CNR CEO noted that the increasingly extreme river flow swings were also affecting nuclear energy facilities further downstream. I wonder what will happen with those nuclear energy power plants over the long-term?