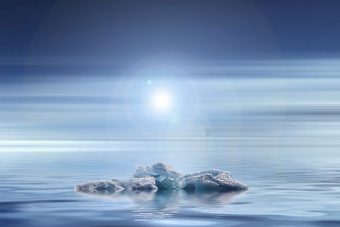 To see the latest story with sea ice extent observations, Don Perovich’s et al. 2017 contribution to the Arctic Report Card demonstrates it is not rebounding or recovering.

It is critical to track such unprecedented pace of change.

Gallaudet mentioned that NOAA is already taking action in terms of advancing our Earth system prediction and capability. Various departments depend on this information including Departments of Commerce, Agriculture and Defense.

Time series of ice extent anomalies in March (maximum ice extent) and September (minimum ice extent). The anomaly value for each year is the difference (in percent) in ice extent relative to the mean values for the period 1981-2010. The black and red dashed lines are least squares linear regression lines. The slopes of these lines indicate ice losses of -2.7 percent and -13.2 percent per decade in March and September, respectively.

The longer-term perspective sure gives the impression of precipitous decline in Arctic Sea ice extent. Accordingly, there are many consequences associated with such a rapid pace of change.

Jeremy Mathis, director of NOAA’s Arctic Research Program noted that “the Arctic is among the most under observed places on the planet. The imperative is clear whether we are dealing with open ocean navigation, refugees or native hunters.”

Spanning a dozen years, NOAA, has consistently delivered a robust assessment of the Arctic. As we know, the world depends on this information because what happens in the Arctic influences coastlines around the world, extreme weather events in the Northern Hemisphere and more.