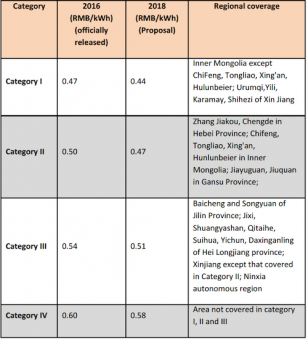 The proposal for new feed-in tariffs for onshore wind in the draft NEA decree:

The Chinese wind market continued to power ahead during the first half of 2016. According to the Chinese Wind Energy Association’s unofficial estimate, H1 installations were 9-10 GW, which indicates that this year’s total should be over 20 GW again.

Installations are driven by the pressure of the next downward adjustment of the feed-in tariff, which is expected to come into force in January 2018. Talks about the 2018 tariff adjustment have been going on for a long time, and the Chinese National Energy Administration (NEA) released a draft decree just one day before China’s Golden Week on Sept. 29. The draft NEA decree on “Lowering down of tariff of Renewable Energy” affects the renewable energy sector as a whole; tariffs for solar PV and for both onshore and offshore wind were all touched upon.

The most discussed are the tariffs for offshore wind and solar PV. The onshore wind tariff adjustment did not change from previous drafts, which have already been circulated.

The new proposed tariff for offshore wind is ruthless towards the industry with a reduction of 0.05RMB/kWh for each category(offshore and intertidal): 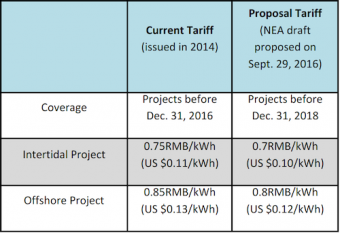 This downward adjustment of the FIT is driven by the large scale installations of both wind and solar PV. The National Renewable Energy Fund, which was formed by money raised from renewables surcharge to finance renewable energy, had a RMB 55 billion (US $8.2 billion) deficit in the first half of 2016, according to a government official at a recent workshop celebrating the 10th anniversary of the Renewable Energy Law.

In the meantime, curtailment continues to worsen. According to NEA’s statistics, the first half year’s curtailment rate reached 21 percent, which is 5 percent higher than last year. The heavy curtailment, together with a worsening of the lack of connections for new projects has caused local governments and grid companies to call for a temporary halt on project licensing in some of the provinces in northern and western China, such as Jilin, Gansu, Heilongjiang and Ningxia; and this is diverting investment into lower wind areas in the central and eastern provinces.

Offshore wind development has yet to take off in China. The sector seems to continue with its “medium pace” development in 2016 and this is likely to be the case for the next few years. The offshore tariff adjustment, together with the difficulties in investments in onshore wind projects in the northern and western provinces, might bring more investment into the offshore sector, but that won’t make a huge difference. The reality of the difficulties in the offshore sector is keeping many Chinese OEMs and developers away. So far only a handful of OEMs are competitive and active in the offshore market. None of the international OEMs has set foot in the offshore business in China (Siemens formed a joint venture with Shanghai Electric, but the JV partnership has now ended). The low tariffs are the major reason for this. Four OEMs — Shanghai Electric (joint venture with Siemens until recently), Sinovel, Envision and Goldwind — account for 86 percent of the offshore market.

In 2016, the first real offshore project, over 10 km from shore and in waters more than 10 meters deep, was fully commercialized, using the Shanghai Electric-Siemens’ 4-MW machines. All in all, with the current tariff level and the current market setup, it is hard to see a huge surge in the offshore market in the short term.

The Chinese offshore industry is indeed following the old Chinese saying: to cross the river by feeling the stones. Without a proper investment environment that is friendly to international players in the offshore market, the Chinese offshore wind sector will continue with its current development pace for some years to come.

This and much more will be discussed in detail at China Wind Power taking place from Oct. 19-21 in the New China International Exhibition Center in Beijing.