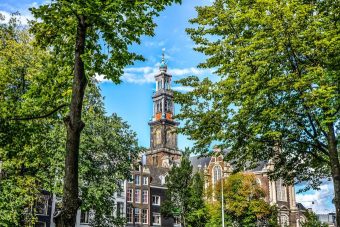 The Dutch city of Amsterdam is making substantial progress towards a wide range of sustainability goals, most notably regarding overall energy consumption.

According to the latest of the city’s annual sustainability report, overall energy production per capita declined by 9% compared to 2013, and 5% compared to 2015. If this trend is to continue, the city’s goal of a 20% reduction from benchmark year 2013 is in sight. A wide range of policies have been contributing to this result, ranging from educating citizens on how energy savings can be achieved to offering financing options for housing insulation. Another noteworthy policy has been the enforcement of a Dutch law that obliges companies to undertake energy efficiency improvements with payback times of fewer than 5 years.

Besides reduced energy consumption, the city has also improved sustainability on the supply side, but it is questionable to what degree progress has been sufficient. From 2013 to 2016, renewable energy generation increased by a meager 3.3%, which falls short of the population growth for that time frame. As the city itself is only expected to attract more residents in the years ahead, Amsterdam will have to seriously step up its efforts in order to meet its sustainability target of a 20% increase in renewables per capita by 2020 compared to 2013.

Solace could come from developments in the solar market. Compared to 2013, total installed solar capacity has almost tripled, and year-on-year growth rates have been consistently spectacular for the past decade. Unfortunately, total installed capacity topped only 24 MW in 2016, meaning that even on this swift exponential growth trajectory, we are still years away from significant carbon footprint reductions.

Another reason renewable energy generation is sluggish is that several wind energy projects took more time to develop, and others got cancelled. The underlying problem is a lack of space, or at least a lack of political will to allocate space to wind on land. The not-in-my-backyard problem is hard to crack in a country where backyards are everywhere and each inch of land is highly valued.