Pollution inequality between the world’s rich and poor is widening, according to the latest global data from the World Health Organisation (WHO) which shows that 7 million people – mostly in developing nations – die every year from airborne contaminants.

Overall, nine in 10 people on the planet live with poor, even dangerous, air, says the WHO report, which is considered the most comprehensive collection of global air quality data. But levels of contamination vary widely depending on government actions and financial resources. 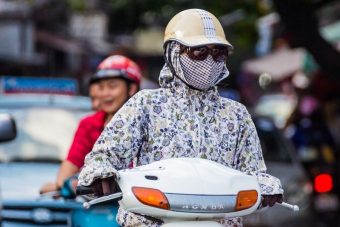 For the first time, the report included regional historic data, which showed that more than 57% of cities in the Americas and more than 61% of cities in Europe had seen a fall in PM10 and PM2.5 particulate matter between 2010 and 2016.

But these gains were set against a worsening trend in other regions.

The most rapid deterioration was in south and south-east Asia, where more than 70% of poor cities suffered worsening air quality. The Middle East was also badly affected.

Delhi and Cairo are by far the most polluted mega-cities in the world with average PM10 levels more than 10 times the WHO guidelines. They are followed by Dhaka, Mumbai and Beijing, each with particulate concentrations about five times the recommended level.

The Americas, principally the US and Canada, was the only region where a sizeable majority of people – 80% – breathe air that meets WHO guidelines on particulates. In Asia and the Middle East, the figure was close to zero.

In terms of household air pollution, which contributed to 3.8m deaths, the gap is also wide because families in poorer nations are more dependent on burning wood, coal and kerosene for cooking and heating.

Overall, the authors said the global annual death toll of 7 million is largely unchanged from the previous 2016 air pollution report by the WHO, despite growing awareness of the problem and government promises of action.

“There are cities and regions where improvement is happening,” said Sophie Gumy, one of the authors of the report. “But even if things have started to move, they aren’t moving quickly enough. Seven million deaths is a totally unacceptable figure. The fact that 92% [of people] are still breathing unacceptable air is the news. Pollution remains at dangerously high levels.”

Airborne contaminants from cars, factories, wood fires and other sources cause a quarter of fatal heart attacks and strokes, 29% of lung cancer deaths and 43% of mortalities from chronic obstructive pulmonary disease, the report shows.

Reducing these risks depends on public awareness and political will, as well as income. The authors of the report praised China, which has tightened pollution controls in the wake of “airpocalypse” scandals, public protests and health concerns.

“One of the reasons for that, is the health argument is strongly presented and citizens felt the link between air pollution and their own health,” said Dr Maria Neira, director of public health at WHO. “We’d like to see the same movement now in India, which is a country of particular concern.”

There are signs of progress from specific projects, such as India’s Pradhan Mantri Ujjwala Yojana scheme which has provided 37 million women living below the poverty line with free liquified petroleum gas connections, and Mexico City, which has committed to cleaner vehicle standards. More cities are also measuring air quality, which is pushing the subject up the political agenda.

But there is much to be done, even in wealthy nations with relatively progressive policies. The new data reveals 49 towns and cities in the UK – ranging from London and Manchester to Prestonpans and Eccles – are at or over WHO standards for PM2.5. Jenny Bates, Friends of the Earth air pollution campaigner, said this showed the need for more research and stronger policies.

“As more air quality data becomes available, we are uncovering a deeply concerning number of seemingly quaint, fresh aired places across the UK with dangerously polluted air,” she said.

WHO cautions that its data remains incomplete. More than 4,300 cities in 108 countries now provide ambient air quality information, a rise of more than 30% from 2016. This is supplemented by satellite, but there are relatively few data collection points in Africa, standards vary from country to country, yearly variations can be affected by climate, and there is currently little to distinguish between airborne sand from desert regions and toxic particulates in big cities.

But the overall picture is clear. WHO says the threat remains enormous across the globe with the worst impacts hitting the poor.

“Air pollution threatens us all, but the poorest and most marginalised people bear the brunt of the burden,” says Dr Tedros Adhanom Ghebreyes.