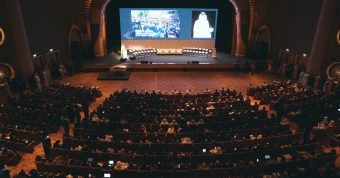 The tools required to meet the decarbonisation goals of the Paris Agreement exist today, and are technically feasible and economically attractive. This central message is being presented by IRENA at the UN’s Abu Dhabi Climate Summit taking place on June 30 and July 1 in the UAE capital. IRENA will outline that falling technology costs have made solar, wind and other renewables the competitive backbone of energy decarbonisation and the most effective climate action tool available.

“Renewable energy delivers jobs, delivers on sustainable economic development and will deliver a viable climate solution. It is the competitive backbone of global energy decarbonisation and an essential and ready instrument to achieve the Paris Agreement goals,” said Francesco La Camera, IRENA Director-General, who is participating in a series of ministerial-level sessions addressing the energy transition.

To meet climate goals however, deployment needs to happen six times faster than it is today. IRENA estimates that keeping global average temperature rise well below 2 degrees Celsius by 2050, means two-thirds of the world’s energy should be renewable.

A clear opportunity lies in increasing ambition under Nationally Determined Contributions (NDCs), a framework for co-ordinated climate action under the Paris Agreement. Currently NDCs would increase installed renewable power capacity by 3.6% annually to 2030, yet annual renewable energy deployment has actually increased by 8.5% over 2015-2018. NDC targets could already more than double just by reflecting the current pace of renewable energy deployment.

In addition to climate benefits, IRENA analysis suggests that the cumulative payoff by 2050 of increased renewables deployment, in economic terms, would be a 2.5% GDP boost —between USD 65 trillion and USD 160 trillion— and up to 31 million additional renewable energy sector jobs.

Further championing renewable energy’s case at the Abu Dhabi meeting, IRENA staff and directors are participating in meetings on climate investment, NDCs, and transitioning away from coal to renewables, among others.