During 2015 Nepal earthquake, the hydropower sector experienced severe losses. The country temporarily lost about 20 per cent of its hydropower capacity and more than 30 hydropower projects were damaged. The projects, which were affected by earthquake‐triggered landslides, were the worst hit. 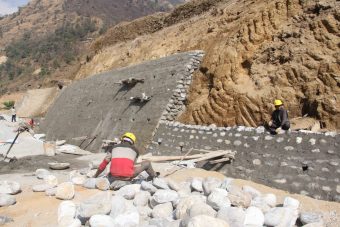 Similarly, one cannot say for certain that Jammu & Kashmir, which is categorised as zone IV & V seismic earthquake-prone area, won’t be affected by eight upcoming hydropower projects, which will be located in seismic zone V. The state has a history of earthquake destroying dams. The October 2005 earthquake, one of the deadliest ones to hit South Asia since the 1935 Quetta earthquake, triggered around 2,500 landslides, according to an analyss. Those landslides resulted in destruction of infrastructure.

The risk of building dams in the Himalayan region is manifold and that has again being emphasised by the findings of a recently released study on 2015 Nepal earthquake. The study reveals that many hydropower projects in Nepal were wiped out by moving debris.

The researchers from the Institute of Earth and Environmental Science, University of Potsdam, Potsdam‐Golm, Germany analysed reports on damaged hydropower plants in Nepal and concluded that the damage caused to plants in the aftermath of the quake was due to landslides triggered by the quake rather than the earthquake itself.

The team also analysed 273 hydropower projects that are already in operation, under construction or are being planned in the Indian, Nepalese and Bhutanese Himalayas. They found that about 25 per cent of them are likely to face severe damage from quake-triggered landslides. The researchers point to an urgent need to re-evaluate hydropower development in the region.

Currently, more than 600 large dams have been built or are in some stage of construction or planning in the seismically active Himalayas, but most of them are probably not designed to withstand the worst earthquakes that could hit the region. According to a DownToEarth report, the Himalayas would have the highest dam density in the world, with over a thousand water reservoirs dotting the mountain range in India, Bhutan, Nepal and Pakistan, over the next few years.

“We have overestimated the hydropower potential in the region and underestimated the cost,” says David Gernaat, a computer modeller at the PBL Netherlands Environmental Assessment Agency in The Hague.

Source: Down to Earth