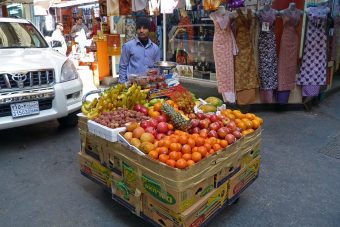 In June 2019, the Kingdom of Bahrain revealed its plans to ban plastic bags. The move took many by surprise. Ahmed Rajab, a photographer in Bahrain for the Gulf Daily News, is one supporter of the decision. He recalls a sad episode he captured on his camera: “With their bright pink colour, flamingos are so majestic and beautiful during flight, but then I saw a dead flamingo on the coast surrounded with plastic waste, and it was the exact opposite of beauty. It was gut-wrenching to capture that picture on my camera—a beautiful bird surrounded by plastic bottles and waste… It almost seemed like our waste murdered it and that is the sad truth.”

The ban is a great start, he says, and it will put the country on the road to sustainability. But he also believes in the importance of changing people’s attitudes and perceptions, especially those of children, to ensure that they grow up environmentally conscious. “Anything harming the environment will eventually harm us, so we need to take steps to regulate and ban harmful substances, and work together towards a healthier planet for all creatures.”

Bahrain means two seas in Arabic, a tribute to its sweet water springs and salty seawater. The small island, home to nearly 1.5 million people, is particularly vulnerable to plastic waste. Historically, its waters have been known for their richness, hosting more than 200 varieties of fish. Fishing, more specifically pearl fishing, was for centuries the main means of livelihood for the people of Bahrain.

In 2013, the United Nations Educational, Scientific and Cultural Organization (UNESCO) recognized Bahrain’s Pearl Road as a World Heritage Site, recalling the nation’s longstanding reputation for an industry that has shaped its culture.

However, with the booming oil industry and pollution, marine life in the waters of the Gulf of Bahrain have declined drastically. Coral reefs, sea turtles, dugongs and numerous fish species are suffering the effects of marine pollution. With population growth and the increased production and consumption of plastic products and packaging, marine litter exacerbated the problem and contributed to the diminishing fish stocks.

To address these critical environmental challenges, the Kingdom of Bahrain seized the opportunity in 2018 to join the UN Environment Programme’s global Clean Seas campaign. Since then, youth networks, civil society, the government and others have spared no effort to turn the tide on plastic. 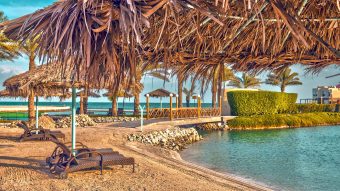 Furthermore, the government plans to expand recycling by increasing the total number of recycling bins, thereby reducing plastic waste that ends up in landfills.

Bahrain is moving steadily towards a full-fledged ban. The Supreme Council for the Environment together with the Ministry of Industry, Commerce and Tourism are working on policies and guidelines for manufacturers and suppliers to ensure a smooth transition to a suitable alternative. A seminar on plastic products regulations was held following the announcement of the ban to help manufacturers and importers meet the technical requirements. It also introduced measures that will be taken to monitor ports customs and local markets.

UN Environment’s West Asia Office Director and Regional Representative Sami Dimassi commended the bold decision that made the Kingdom the second country in West Asia to take a stand against non-biodegradable plastic bags after the Sultanate of Oman. “Plastic in the ocean has a disproportionately large impact on marine life. Small pieces of plastic are eaten by fish, sea turtles and sea birds, often resulting in their death. This is in addition to the fact that often, these animals become entangled in plastic debris which leads to fatal injuries and consequently puts an end to their short-lived lives.” He also added that non-biodegradable plastics break down into small pieces which are eaten by smaller marine animals and enter the food chain, eventually impacting human health.

Prior to the ministerial decision, many stores in Bahrain had already substituted plastic bags with paper ones. For them, the transition was not that difficult—they are mostly European franchises that had already switched to more sustainable alternatives years back at their mother companies.

However, during the years 2018 and 2019, a huge interest was sparked by local supermarkets and hypermarkets in building a culture of sustainability in Bahrain. At least 15 branches of the two main hypermarkets in Bahrain introduced reusable bags as part of their green policies. For instance, Lulu and Carrefour management have both sought the advice of UN Environment’s West Asia Office during the transition. For a small island like Bahrain, this is a great achievement.

The smaller corner shops and the food service industry are the main culprits when it comes to the use of plastics in the Kingdom. While biodegradable alternatives are available, it is less costly and more convenient to use the good old plastic bag. Nevertheless, activists, the government and youth are relentlessly raising awareness on the negative impacts of plastic pollution on the environment, while the Supreme Council for the Environment is guaranteeing that consumers will not bear the cost of the ban.

The people of Bahrain have always been pioneers in many aspects. Their openness to other cultures and interest in modern education have been the drive for many green-thinking advocates. The nation’s younger generation is empowered and entrepreneurial. There are several youth-led green initiatives in the country, including a focus on organic and green cosmetics production and upcycled fashion.

Bahrain’s active civil society has been on the back of polluters. Even schools have started exposing children to environmentally friendly practices and information, while the country’s private sector fosters environmental responsibility for the community.

And now, the people of Bahrain have a government that is adamant about making significant progress towards sustainable development.